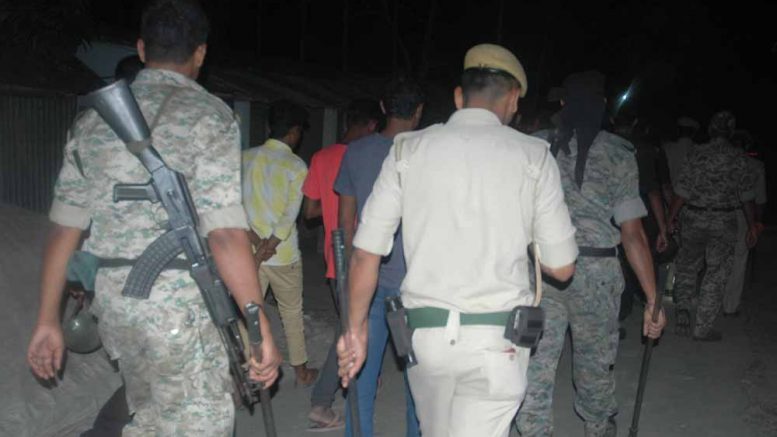 Police officers during a night patrol in the village

Chakdah: An elderly farmer had died when he was hit by a bamboo pole amidst a clash between two groups of youths that broke out over teasing some school girls in Nadia’s Chakdah on Tuesday evening.

The victim, Taher Biswas, a resident of Sahispur-Gohora village was rushed to Jawaharlal Nehru Memorial hospital in Kalyani where he succumbed to injuries.

Police have so far arrested one youth and detained for interrogation seven others for their alleged role behind the murder and the teasing of the girls.

Police sources said that trouble broke out on Tuesday afternoon in Chuadanga-Gohora village when a group of youths were allegedly taking pictures of some girls of Sahispur Kiranbala Vidyapith on their mobile phones when they were returning home from school. As the girls had raised their voice in protest over their alleged act, the local traders rushed in and had beaten up some of the youth. The accused youths, who were resident of adjacent Porari village, left the village being beaten and returned within an hour in a large group and attacked the local villagers and traders. As a clash broke out Taher Biswas tried to pacify the erring youths, but in the milieu he was hit by a bamboo pole by a youth. He was initially taken to Chakdah state general hospital, from where he was rushed to JNM Hospital in Kalyani where he died later in the evening.

Nadia superintendent of police Santosh Pandey said: “We have arrested one person so far, but detained at least seven others. They are being questioned now and could be arrested later on”.