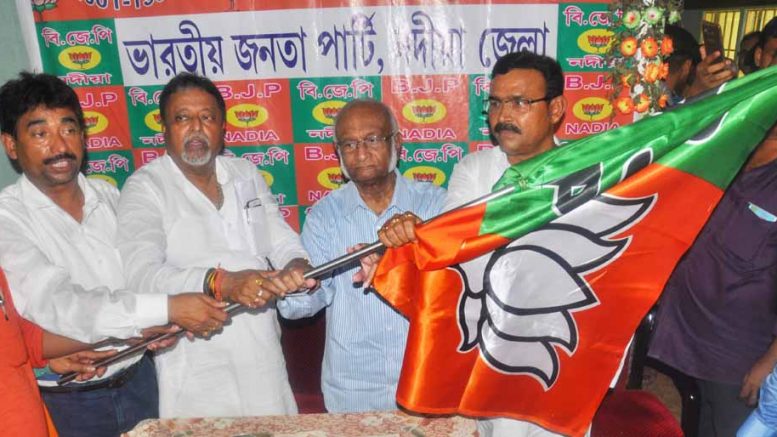 Pal, who was disgruntled with the Trinamul’s Nadia leadership received BJP’s party flag from Mukul Roy in Krishnanagar. He was nominated as a party candidate for Nadia Zilla Parishad for seat No. 26 for the ensuing panchayat poll. But, the BJP leadership appeared to be shocked on Monday , when Trinamul general secretary Partha Chatterjee today announced his comeback in Calcutta with Pal by his side.

Justifying his return to Trinamul’s fold Pal said: “There were certain issues on which difference in opinion developed with Trinamul leadership for which I quit the party and joined Trinamul. But, the district leadership of the BJP did not bother to follow the instruction by the state committee. I was feeling humiliated so decided to comeback”.

Trinamul’s Nadia district leadership, however, appeared to be reluctant to accept Pal any more. Trinamul Nadia president Gouri Shankar Dutta said, “Pal has identified himself as a Mukul Roy loyalist and left Trinamul to join BJP through him. He received BJP flag from him. He lacks credibility. However, if the state leadership accepts him I have no reservation”.

BJP’s Nadia (North) president Mahadeb Sarkar said, “Pal was under tremendous pressure since he joined BJP. He on a number of occasions told me about this since he joined BJP on April 8. I advised him to have patience and to face the pressure bravely, but unfortunately he succumbed to the pressure. This is a typical Trinamul ploy else he could be implicated in false case”.

Meanwhile, return of Pal to Trinamul might cost the BJP a Zilla Parishad seat as there would be no party candidate for the seat No. 26 for which he submitted nomination. BJP’s  Nadia (North) President Mahadeb Sarkar said, “We are hopeful that the Calcutta High court would extend time for submission of nomination and we will be able field a fresh candidate to the seat”.