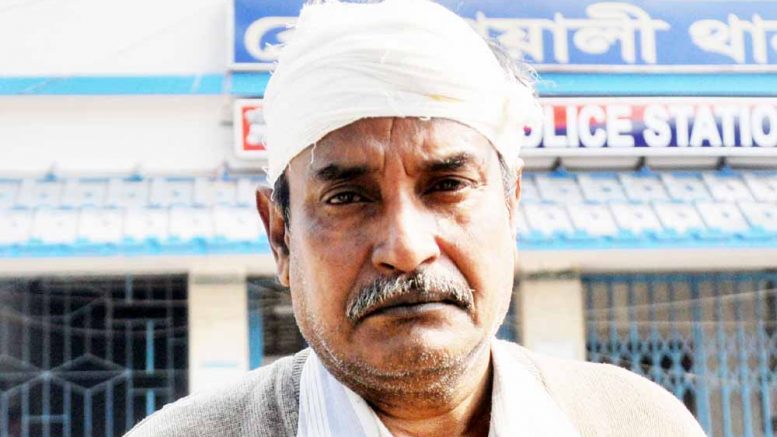 Krishnanagar, Jan. 24: A 58 year old teacher was allegedly beaten up outside his home in Krishnanagar on Tuesday night after he protested against two youths drinking in the open creating nuisance. The man, a teacher by profession, was beaten up again by those drunken youths barely after two hours in the night, when he was going to police station to lodge a complaint.

Mahim Ranjan Ganguly (58), a resident of Baruipara who works as a special educator for intellectually disabled children, however, gathered courage and lodged complaint against two unidentified youths on Wednesday morning.

On Tuesday night Ganguly was hit on his head with a bamboo pole by two youths when he asked them to drink elsewhere and stop nuisance. But they left him bleeding profusely. Some neighbors who found him lying on the road took him to Saktinagar district hospital in the town, where the doctors given him three stitches on his head.

“I was again beaten up later again in Choudhurypara lane when I was going to police station to lodge a complaint. This time one of the youths hit me with an iron rod on his leg and hands and forced me to go back home. But, today I visited the police station and lodged complaint”, Ganguly added further. Police have so far could not arrest any of the culprits.

Based on Mahim’s complaint, the police today started a case against the unidentified youths for ‘causing grievous hurt’ and for ‘criminal intimidation’. An officer of Krishnanagar police station said: “We have got some clues and expect to nab the culprits soon”