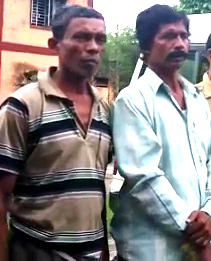 Gangnapur, Aug. 3: Police today arrested a 55 year old private tutor from Nadia’s Gangnapur for allegedly uploading a morphed photograph of a class eight girl to his facebook timeline showing her as his wife. The accused private tutor had also beaten up the girl’s father with support of his brother when he went to his house on Tuesday night to protest his act.

The girl’s father’s left ear was ruptured in the attack as the duo punched him randomly. He was taken to Ranaghat sub divisional hospital last night where he was given four stitches.

The tutor identified as Amit Debnath and his brother Prabhat, a farmer by profession, were picked up by police from their home in Majhergram area of Gangnapur police station early in the morning and produc1ed before a court in Krishnanagar on the basis of a complaint lodged by the girl’s father (Sujit Adhikary).

A senior police officer said: “We have arrested the tutor for his sexual gestures and sexual inclination towards the minor girl who used to come to his house to take private tuition. The private tutor has particularly been charged under the Protection of children from Sexual offence act, 2012 while additional charges have been brought against him and his brother under section 34 (common intention), 307 (murder attempt), 325 (causing grievous injury) of IPC for attacking the girl’s father”.

According to local sources, the girl who also stays in Majhergram area used to take private tuition from the elderly teacher. But, the teacher often embarrassed her by touching her and sometimes embracing her.

The girl’s father said: “I was a student of the teacher about 15 years ago and respected him a lot. I never imagined that he could be so perverted. He used to try to touch private parts of my daughter and often embraced her. He was unmarried. But recently become obsessive to marry my minor daughter. A few weeks ago being unable to bear such regular embarrassment my daughter stopped taking private tuition from him. This angered him very much as he morphed my daughter’s picture snapped earlier and made a joint photo with him to show her as his wife, which he later posted to facebook”.

Girl’s mother, a homemaker said: “We came to know about the joint picture yesterday and checked the facebook through other’s profile. After this my husband went to his home last evening to protest his act, but the teacher and his brother beaten up him. They punched and kicked him. We later lodged complaint against them at the Gangnapur police station”.