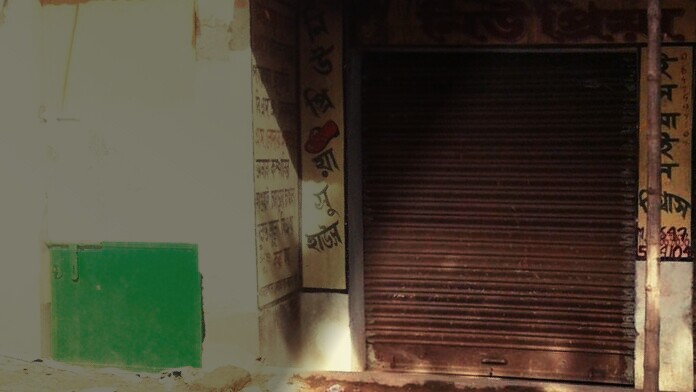 The local leaders including the newly entrant CPM members who took control of the CPM’s Thanarpara (North) branch committee office on Sunday night a little after local Trinamul MLA Mohua Moitra handed over the party flag, today acknowledged that it was “mistake” on their part which should not be repeated.

Today the Trinamul activists removed the party symbol from door of their “new” office which they painted yesterday. They have also the police to request the CPM leadership to wait for a day so that they can paint it by red color to provide an even look.

Trinamul insiders also said that newly elected MLA Mohua Moitra was also very annoyed on the alleged ‘capture’ even though she refuted the allegation when NfN contacted her. She termed the allegation as “baseless and rubbish”.

Today Moitra, however, did not make any comment as repeated calls to her cell phone remain unanswered. She did not even reply to the text messages sent to her phones.

However, Karimpur-II block president Afazuddin Biswas today categorically said: “It was a mistake which could be avoided. The newly entrant CPM members of the local penchant were responsible for this mistake. They used the party office till the previous day before joining Trinamul. They decided to keep the party office under their control by changing it to Trinamul office after joining. We, the local Trinamul leadership were not aware of their plan. But, as soon as we came to know this, clear instructions were issued to them to leave the party office immediately. We have also told them that our top party leadership will not tolerate such illegal act”.

They put Trinamul flags removing the CPM’s ones, thrown out Jyoti Basu’s photo frame a day later painted Trinamul’s party symbol on the door of the office.

Local MLA Mohua Moitra was present around 200-meter away at a party programme when her party activists attacked the CPM party office.

On Monday CPM’s Rahamatpur local committee secretary Ashim Sarkar lodged a complaint against Ismail and ten others at the Thanarpara police station following which police flung into action.

A senior police officer said: “We called the local Trinamul leadership and told them to leave the CMP party office before we take any action. Initially, some young activists were against the idea, but good sense came back as senior leaders realized the issue and reminded them about chief minister’s recent instruction to party workers to be refrained from any unlawful work”.

But, Trinamul insiders claimed that the local leaders was compelled to abandon the captured party office only after Mohua Moitra called some of them asking to leave the CPM’s office immediately.

“She was very angry knowing about the illegal occupation of the CPM party office. She told us that such unlawful acts should not be tolerated. The district leadership also told us similar words”, said a senior leader.

CPM Karimpur zonal committee secretary Ajoy Biswas said: “The local police today apprised me that the Trinamul have left the party office. But, police have requested us to wait for a day as the Trinamul would rearrange our office to its previous look and remove their party symbol. I did not believe it and so did not withdraw the complaint”.