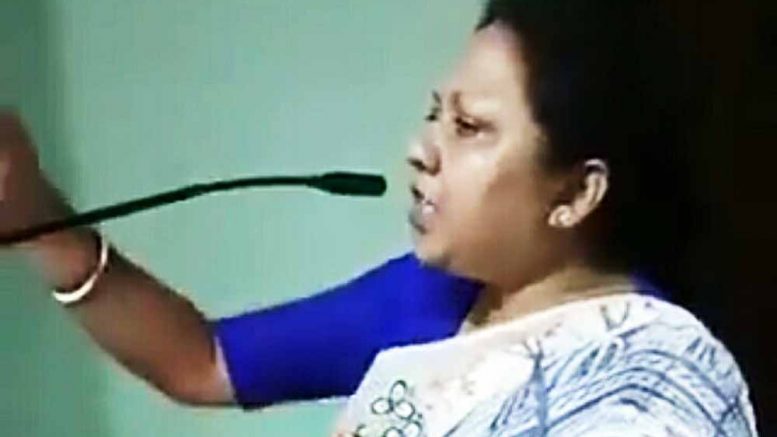 Ratna Ghosh speaking at the closed door meeting in Shimurali

Chakdaha, April 17: Trinamul’s Chakdah MLA and state micro, small and medium enterprise minister Ratna Ghosh has been caught in camera provoking party workers to attack central force jawans with brooms and retreat from the area if they put barriers on their way to manage the poll battle.

The minister has also told the party workers to forget about ‘right’ and ‘wrong’ and to ‘adopt’ the mean whatsoever they feel ‘appropriate’ to win the poll battle, apparently advising not to bother using unfair means on the day of poll.

Some party workers video-graphed her speech and shared it on social media platforms apparently to convey Ghosh’s message, but had to remove it since it created a controversy. The purported video, however, meanwhile, went viral causing embarrassment to Trinamul leadership.

The incident ignited a controversy across the Nation with top BJP leaders like Amit Shah made it an issue and tweeted the video. In his tweet Amit Shah said, “Finally Mamata didi’s trusted lieutenant accepts that her party believes in the idea of violence and anarchy”

The vitriolic against the central force prompted the BJP leadership to lodge complaint to Election Commission against Ghosh. Prasenjit Sarkar, chief election of agent of BJP’s Ranaghat candidate Jagannath Sarkar said, “We have submitted the video footage to the EC along with complaint. We are hopeful that EC would take cognizance of the incident and act fast”.

“Trinamul leadership has become afraid as due to presence of central forces at poling booths their plans to rig the polls might fall flat. So they have been consistently trying to instigate party workers against central force”, he added further. Since the first phase of the poll in the state, Trinamul leaders including Mamata Banerjee have gone ballistic against the central force and also accused jawans of threatening the voters in the name of confidence building measure. But, Ghosh’s comment appears to be direct instructions to party workers to take on central force jawans on the day of poll.

Reminding the party workers how they ‘worked’ during 2016 assembly election and ensured party’s victory despite strong presence of central force, Ghosh said, “You have shown your capabilities in 2016 elections. I witnessed how you were chased by central force. Our boys were beaten up and suffered bloodbath. This time challenge is bigger. There is nothing for which you need to be scared. I will visit every booths ……. we wouldn’t pay heed to central force”.

In a strong reaction to Ghosh’s statement, CPM state committee Secretary Biman Bose said, “The statement amply indicates her education and the culture to which she belongs”.

Ghosh, in her reaction said, “If I have done any mistake, the Election Commission is there to examine it”.

Trinamul’s Nadia district president Gourisankar Dutta said, “We have nothing to do with such allegations. It is the election commission who would judge best if Ghosh has done anything wrong. If the EC finds any violation of conduct in her speech, it may take action”.