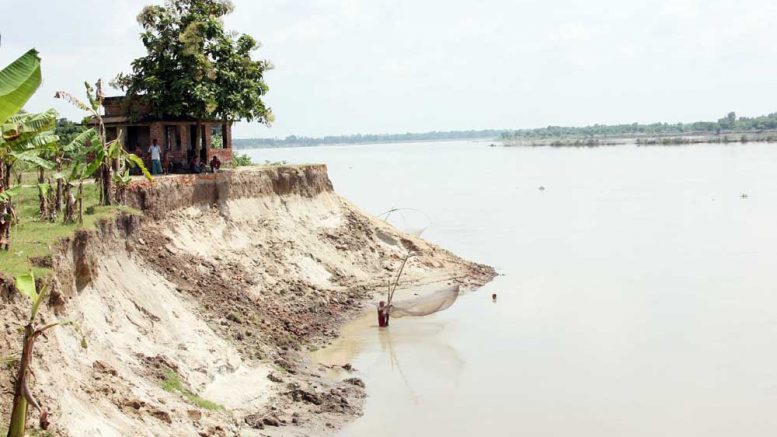 Chakdaha, Aug. 29: The students of Hemnagar primary school in Nadia’s Chakdaha is teetering at present being close to the edge of the bank of river Hooghly that has been eroding first. Panic gripped the 60 students, their teachers and guardians living in Hemnagar and adjacent villages as river would possibly engulf the school soon.

The water in the river course is at present passing by barely 50-meters away from the 46 year old school putting it on the brink.

Not just Hemnagar primary school, rather there are four other primary schools located in adjacent areas like Tarinipur, Umapur, Alaipur and Sarati under Sarati gram panchayat, which are at present waiting for the worst being on the brink. The situation has been aggravated following the recent spate of rain that caused fresh erosion in Sarati panchayat areas which so far engulfed at least 15 residential houses apart from over 100 acres of agricultural land.

Hemnagar primary school’s head master Surajit Sarkar said: “I am afraid that the surging river would soon gobble up the school. The ongoing rain that inundated the river course has caused the erosion bringing the school on the edge even though it was about 300meter away from the river course barely a month ago”.

“We are now counting days. The anxious villagers, who have lost their lands and houses already, had taken away their kids from the school. During the past one year, the numbers of students have dropped alarmingly. Now we have only about 60 students of five classes attend school”, the head master laments.

Noor Islam Mandal, a CPM leader and member of Sarati gram penchant said: “Heavy erosion started from July and the river came within a closer to the schools, sparking a continuous sense of fear among teachers and students. They feel that the river could gobble up the school any moment. Their fear is true. Infact some of the schools are to meet the same fate as they met barely few years ago due to erosion,” administration requesting to relocate the school, which, however, yet to take up the matter.

Sub divisional officer Kalyani Swapan Kundu said: “This is a very serious matter. We are working on to relocate the schools so that studies do not suspended in any way”

The irrigation department started packing the bank with boulders covered by metal nets to prevent erosion. But, the villagers are not hopeful that it would able to save the bank and the school at all.

Nadia district primary school council chairman Ramaprasad Roy said: “We have identified some schools which are close to erosion prone banks. We would try to relocate them, but if relocating is not made possible immediately we would accommodate the students and teachers in nearby schools so that their study doest hamper.”

Sahjahan Mondal, whose son Azij reads in class 3 at Hemnagar School said: “After the erosion, we have become worried about our children attending the school. My son is also very scared that the school might subside into the river any day.”