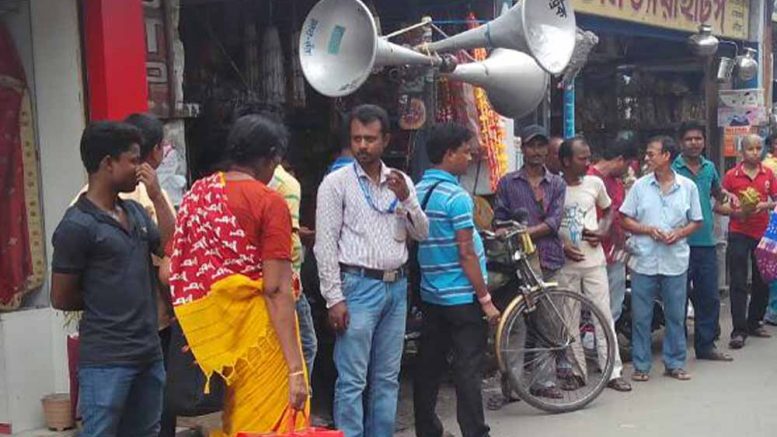 Chakdaha, May 17: Unruly scenes were witnessed at Chakdaha post office in Nadia today when over a few thousand women flocked at its counters to speed post their application forms which have been circulated by a fraudulent racket to appeal before ministry of women and child development for cash incentive of Rupees two lakhs for their daughters purportedly under ‘Beti Bachao Beti Padhao’ scheme.

Even though this central sponsored scheme has no such provision of cash incentives, the women, mostly belong to poor economic background, preferred to stand in queue to speed post their applications forms overcrowding the post office forcing the officials to suspend their works. Repeated appeals by the postal officials, local businessmen, police and members of local administration to evacuate the post office fell into deaf ears as the women in queue refused to leave. The local businessmen who suffered a lot due to rush on the roads in front of their shops also persuaded them using loud speakers. But, nothing could yield a response.

A woman said: “I bought form for Rs 5 and got it attested from my gram panchayat pradhan. I have learnt from reliable source that once my daughter would attain age of 18, the money would be credited to her account. so whey should I leave this opportunity?”

As the women were not in a mood to listen to the repeated appeals made by the postal officials and chairman of Chakdaha municipality Deepak Chakraborty, the civic volunteers were pressed into action who literally evacuated the post office forcing the women out from inside the business area.

Chakdaha municipality chairman Deepak Chakraborty said: “We have information that Union ministry of women & child development has not offered any such cash incentive under the BBBP scheme. We have heard that these forms have been found originating from certain photocopy shops in the town”.

An official of Chakdaha post office said: “Practically we were in a dilemma. We can not refuse to take their letter for speed post. But, at the same time we were at pain as the women being misled due to their innocence. So we decided to make them aware. But, they turned restless. We have been facing similar situation since Monday”.

An official said during the last three days around three thousand applications have been accepted for speed post delivery to New Delhi based ministry of women and child development.

Sources said, BBBP scheme has been targeted by a fraudulent racket circulating fake forms apparently with a motive to get a database of bank account and aadhaar number.

The central government has ordered a CBI probe into the matter as such unruly situation involving thousands of women flocked at the post offices across the country.

District magistrate Sumit Gupta said: “This is very concerning. I will look into the matter”

The Beti Bachao Beti Padhao (BBBP) scheme, launched on January 22, 2015 aims to address the declining child sex ration by preventing sex selective abortion, ensuring survival and protection of girl child as well as ensuring education of girl child. This is a national initiative jointly run by the Ministry of Women and Child Development, Ministry of Health and Family Welfare and Ministry of Human Resources Development. It initially focused multi-sector action in 100 districts throughout the country where there was a low child sex ration. However, this scheme has no provision of any cash incentive.

The official web site of the scheme contains a notice warning members of the general public not to fall into the trap of the fake application forms. As per the notice, circulation of similar forms were reported from other cities like Lucknow, Meerut and Muzaffarnagar in the past and  police complaints have also been registered in Meerut and Muzaffarnagar in such cases.

A senior police officer said: “We have reports that such fake forms have been circulated in many towns, we are trying to found out the people behind such circulation”.

Financial advisor Debabrata Chakraborty suspects deep rooted financial criminal network behind these fake forms. He said: “The ploy behind circulation of such forms appears to be very innocent. But, it has a definite motive. I suspect that a racket having huge amount of black money is behind it. They are deliberately making a database of bank account number with IFSC codes of innocent women. These accounts might be used to transfer money for time being to avoid regulatory surveillance by Government.”