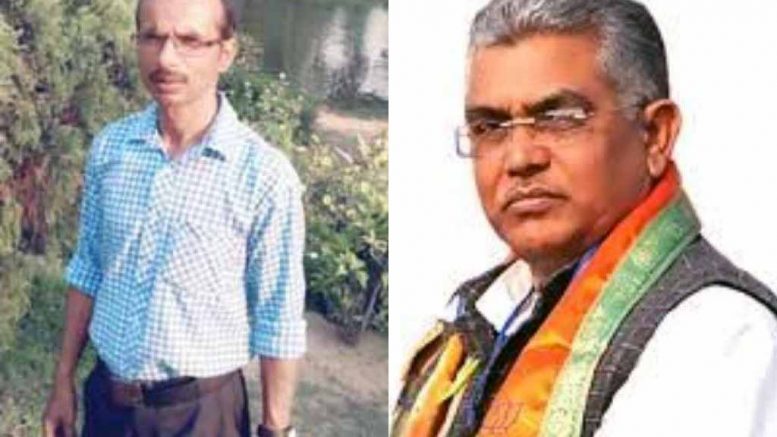 Krishnanagar, May 17: A Panchayat official from Nadia’s Kaliganj has lodged a complaint before district police superintendent against state BJP president Dilip Ghosh accusing him of disrespecting the National flag and National anthem as well as for making derogatory comments about the Hindu mothers.

Sanjit Mukherjee, a resident of Ghoraikhetra village in Kaliganj, who is an employee of panchayat department, has urged the district police chief Sheesh Ram Jhanjharia to treat his complaint as an FIR and start a probe against the state BJP president for his alleged disrespectful comments which he made in his speech at a party rally in Debogram on May 11.

Police, however, yet to start a case against Ghosh. Mukherjee had earlier lodged a complaint at the Debogram police out post against Ghosh on May 13. But, police in that case did not respond too.

Nadia SP, however, refused to make any comment on the matter. But, a senior police official said that the content of the complaint being examined.

“If a coward Hindu says that Hinduism is a religion of peace, I would say you do not deserve to be a Hindu. I guess he has problem in his blood, so you are saying this. You can not be a real Hindu. A person who offers prayer to Sri Ram, Srikrishna or Parasuram cannot say this. Peace will prevail only after battle. Like battle of Mahabharat and Ramayana. In past we have fought many battles for peace and if required we will fight it again” – Dilip Ghosh

Complainant Sanjit Mukherjee said: “By saying “Rokter dosh”, Dilip Babu has dishonored many Hindu mothers. The comment made in bad taste. By saying such words he had desperately tried to promote religious dogmatism for political benefits”.

Ghosh in his 20minutes’ speech had also said that Hindus sacrificed a lot. “The sacrifice made for National anthem and National flag too”.

Mukherjee said: “Such statement is quite insulting to the Nation as a whole and also a threat to the National integrity and harmony as well. I hope police would consider my appeal and take action against Dilip Ghosh”.

A state BJP leader, however, found nothing insulting in the statement of Ghosh. “DilipBabu has said nothing insulting to the Hindu mothers and to our National prides. His statement has historical background with specific perspective. Everybody know what a great loss we had to incur while achieving the independence. By saying “Rakter dosh’ Dilip Babu not insulted the Hindu mothers, rather tried to point out to the lack of courage in one’s mind. The complainant has no knowledge about our history and so misinterpreted DilipBabu’s statement to lodge such politically motivated complaint that only aimed to malign him.”