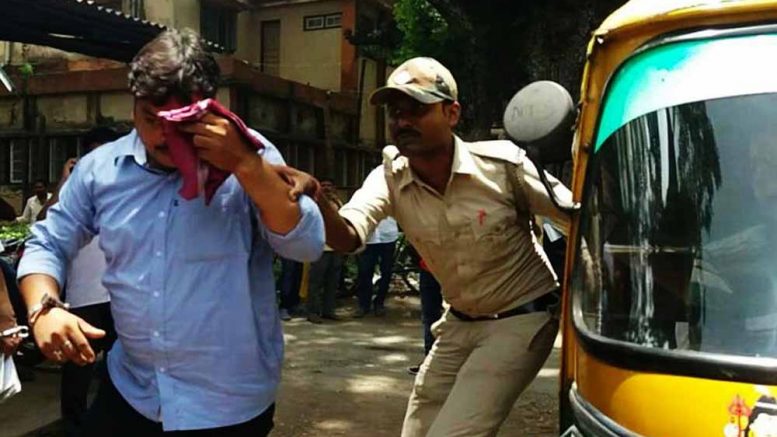 Ranaghat, June 15: Police today arrested a fake MBBS doctor from Nadia’s Hanshkhali while he was visiting patients and accepting fees organizing a medical camp at a club in a remote village.

The accused doctor identified as Anil Kumar Das, a resident of Chinsurah in Hooghly was produced before additional chief judicial magistrate’s court in Ranaghat today, who ordered five days police custody for him.

The police have also arrested a close aide of the “doctor”, identified as Kanai Das, a local resident who helped him to organize the medical camp.

Police said, the fake doctor was detained last evening after some local villagers became suspicious about his credibility observing his doctoral degree written as ‘MBBS (AM)’ on his printed prescription.

The doctor failed to satisfy the local villagers when they questioned him about the authenticity of his MBBS degree. The suspicions become stronger as he also failed to produce his registration number. The angry villagers had then allegedly beaten up Das and his aide before handing them over to the police.

Nadia police superintendent Sheesh Ram Jhajharia said: “We have arrested the Das as he failed to produce any doctoral degree. He claimed to have done a course on alternative medicine which has no relevance with MBBS”.

An investigating officer of Hanshkhali police station said “During interrogation Das had produced some documents in support of his qualification in alternative medicines but those appeared to be not genuine ones. We have charged him for cheating and forgery under relevant sections of Indian Penal Codes.

Local sources in Hanshkhali said; two days ago two women campaigned about the medical camp in Muragacha colonypara of Hanshkhali.

A villager said: “They collected an advance amount of Rs.30 towards registration charge. On Wednesday, the doctor charged Rupees 170 as his fees apart from additional Rs.450 for medicine. They, however, told the villagers that no further amount would be required to pay during follow up”.

But, the villagers became suspicious after observing the doctor’s educational degree written as MBBS (AM).

A villager said: “We have never heard any such degree so we started questioning him”

“The doctor initially appeared to be smart but eventually broke down and confessed that he never passed MBBS. He has only done a course on alternative medicine, We then called the police”