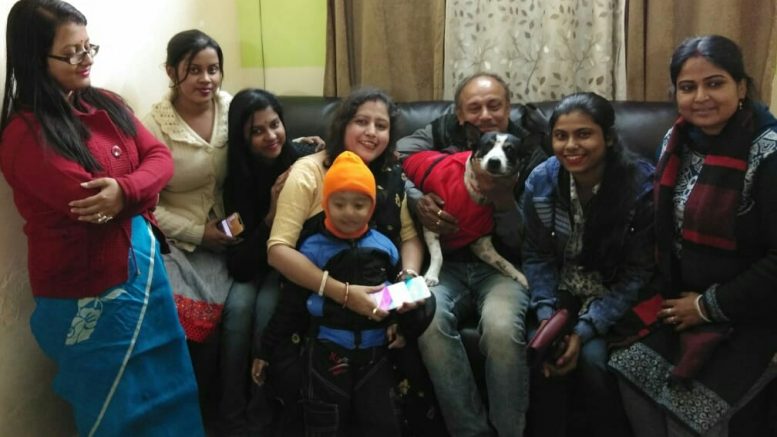 Pusa with the Mujherjee family members on her birthday

Ranaghat, Jan. 17: A 45 year old homemaker in Nadia’s Ranaghat gave a special treat to her neighbors and to about 200 street dogs in the town to celebrate the 5th anniversary of her pet Pusu on Wednesday night. While she welcomed the neighbors with snacks and coffee at home, her real “guests”, were the street dogs for whom Kakali Mukherjee, a resident of Children’s park area, had cooked rice mixed with chicken and fed them late past midnight carrying the food in trolley van along with her husband and some friends.

Kakali celebrated the birthday of her pet barely three days after 16 puppies were beaten to death, allegedly by two nursing students, at the NRS Medical College and Hospital in Kolkata.

The blissful dogs,  puppies to oldies were surprised being served with later supper on Wednesday night by Kakali, her husband Ujjwal, who run a garments factory.

“Five years ago on the day of Makar Sankranti Pusu came to our family when my husband rescued her from a drain where he fell while trying to escape an attack by some street dogs. She was barely one month old then. My husband brought her home. We cleaned her, took care of her wounds. We gradually developed a bond with her. She is now a member of our family and I love her as my younger daughter. For last five years I celebrate her anniversary on makar sankranti and invite neighbors and friends to home. But, this year I decided to make it special by offering a treat to the street dogs in the town”, Kakali said.

Kakali, who on every night feds cooked food to around ten street dogs at her door step, claimed that the special “treat” was planned to convey a message to the society, a section of which acts very cruelly with dogs and animals.

“I felt it very necessary after knowing about the killing of 16 puppies at the NRS hospital. It was like genocide. I could not even imagine how people can act so cruelly on such innocent animals. So I decided to show people how the dogs should be handled”, she said.

“For about last ten years I have been feeding dogs and for this many among my neighborhood ridiculed me. I regularly cook 2kg rice mixed with chicken kima and served street dogs. Some had even raised objection, but gradually they realized my love for the animals”, she added.

On Wednesday Kakali cooked 10kg rice mixed with equal quantity of chicken and started serving after her neighbors left.

She hired a cycle van to carry the food containers and walked through the roads and lane and served them food.

The initiative was lauded by many dog and animal lovers in the district. “It is a great gesture by her. Feast on road for puppies

Such acts can work as the eye opener who nurture cruelty in their heart against dogs and animal’s, said Riya Goswami, secretary of Prayas, a dog lovers’ organisation in Krishnanagar, who and her friends were threatened and abused by some miscreants after she protested killing of some dogs.

Kakali, who has decided to write letter to central government for taking initiative to amend the The Prevention of Cruelty to Animals Act is an Act, as she thinks it is too ‘soft’. She has also planned to set up a sterilization centre for dogs. She said, “Dogs need care after sterilization. The administration often sterilizes dogs, but take no care. This is inhuman. I would try to set a proper set up for them”.