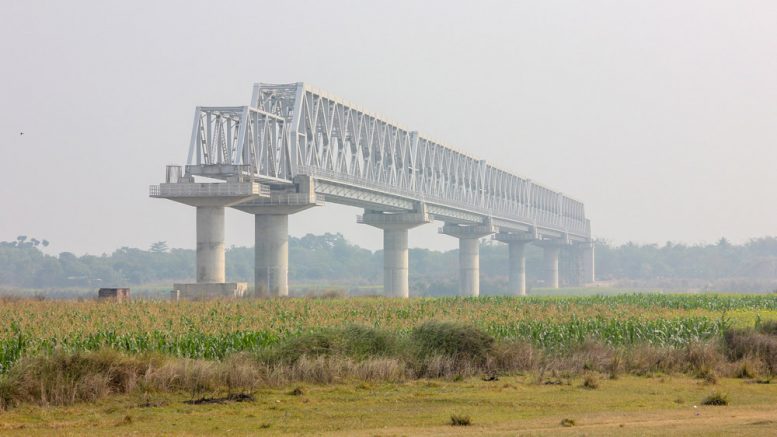 Villagers have alleged that while Trinamul government does not principally supports acquisition of land, how it can acquire land for the project under Railways (Amendment) Act 2008.

Officials of district administration who despite the dilemma have expressed their helplessness reiterating the need of acquisition of the land being it a ‘special railway project’ that would build national infrastructure in a specified time-frame.

In Mahisura, the district administration on behalf of Railways have issued land acquisition notices under Railways (Amendment) Act 2008 to 180 farmers for construction, maintenance and service of a 600-meter long rail bridge and track over river Bhagirathi between Nabadwip ghat and Nabadwip Dham station which would enable a direct rail link between Nabadwip Dham and Sealdah.

To reach Sealdah by train from Nabadwip Dham, people living in the town and adjacent Purbasthali block of East Burdwan at present need to change trains twice (from Bandel and later from Naihati). But, once the proposed bridge over river Bhagirathi is constructed with its adjacent stretch linked with Nabadwip Dham station, people can travel to Sealdah (120km approx) directly via Krishnanagar.

While construction of rail bridge over Bhagirathi is near completion, the proposed acquisition of about 50 acre land for rest of the project which include laying of track with bridge landing through two moujas (Teghari and Gadkhali) consisting of multi crop agriculture land and about 200 pucca houses, have created unrest in the area.

Angry villagers who in writing appraised the administration about their ‘unwillingness’, have formed a resistance group and stalled the construction work forcing the rail and state government officials to leave the area when they came for final survey before taking up the balance work.

The villagers expected that the state government would consider their problem and take up the issue with the railways. But, it is playing a different role, they alleged.

Raushan Ali, a farmer said, “It is really shocking to see that how a party that rode to power on land issue could work as a mere agency of centre to acquire land forcefully? The district administration, local Trinamul leadership has been insisting us to leave land. As we remained unwilling to leave our land, they have been accusing us being influenced by BJP”.

Officials of Nadia LA department, which issued notification for acquisition, have acknowledged that it acted by the provisions of the Railways act for the projects. “For state projects we are bound to obey state government’s own land policy, but this is a railway project. We have been appointed as the acquisition authority”, an officer said. “Considering the sensitivity of land issue in our state, we are in ‘dilemma’, nevertheless, we ought to act as per the Railways Act”, an officer said.

But, the villagers want that the state government should speak for them and make the railways authorities understand about the irreparable loss if their lands are acquired for the project.

“The proposed acquisition would make a horrible impact on our lives… We will lose multi crop land as well as our residences”, said a villager.

“At least 4km railway track will be laid after bridge up to Nabadwip Dham station. This track will go through our agriculture land and residential area. At least 200 houses, locals shops, school, post office, will be demolished for laying the track. This will put us in great difficulty because we will no more be able to buy or construct new house with the amount of compensation. We are all poor farmers or weavers of BPL category. It will not be possible for most of us to arrange new accommodation in Nabadwip, because the land is very costly there. We cannot either settle closer to the river as the area is erosion prone”, said Ali Azan Seikh (50), a farmer.

“We expect that the state government and its local MLA Pundarikakshya Saha would listen to our appeal sympathetically, else there would be strong resistance against acquisition”, said Israfil Seikh, another villager.

“It would have been better if the track is laid in an alternative route shifting it little away towards south entirely through the agriculture land of the same mouzas. In that case we could sacrifice our agricultural land, but not our residences would survive unless this would be very costly for us”, said Nizam Seikh, another villager. Residences in Mahishura likely to be demolished

Expressing helplessness, a State government official said, “It is a ‘special railway project’ notified by the Central Government for building national infrastructure for a public purpose in a specified time-frame. So we need to cooperate..”

A railway official said under Railways (Amendment) Act 2008, the Railways enjoys the power to ‘acquire land’ declaring his ‘intention’ to acquire the land.

Prior to fell ill and admitted to SSKM Hospital last week, Trinamul MLA Pundarikakshya Saha blamed BJP for inciting the villagers. “As per the Railways at the farmers need to evacuate the land for the project. They will be well compensated. But, unfortunately the BJP and some outsiders misguiding the villagers for vested political interest”, said Saha. Saha organised a meeting to woo the villagers in last week, but it flopped.

Villagers said, “There is no BJP in Mahisura…all residents of Mahisura joined hands together for the 180 families for getting their trivial differences and vowed to fight against acquisition”.