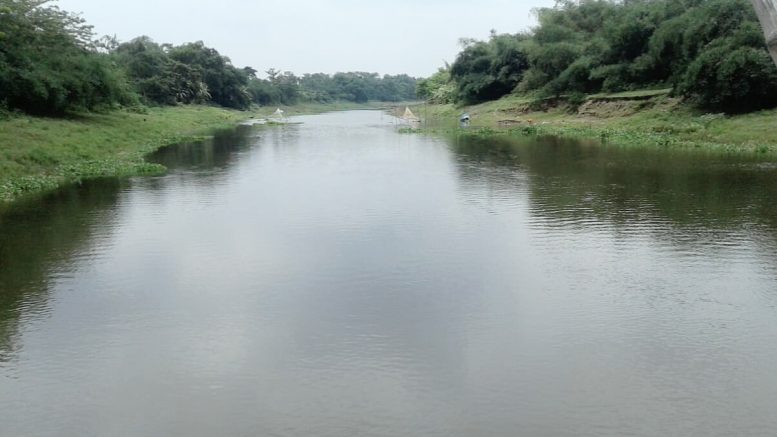 Ranaghat, July 23: The fishermen and the nature care activists fighting for a solution of Mathabhanga and Churni river’s pollution caused by a Bangladeshi sugar mill at bilateral level between India and Bangladesh, have decided to file a petition before the National Green Tribunal (NGT) against the centre as it allegedly so far does not bother to execute a verdict of the Tribunal that delivered to solve the problem of pollution.

On September 30, 2016, while delivering a judgment on a petition filed by lawyer Madan La of Ranaghat on issue of pollution of the two rivers allegedly caused by a Bangladeshi Sugar mill, the NGT directed the Ministry of External Affairs to talk to the Bangladesh Government for setting up of an effluent treatment plant. But, the fishermen alleged that even after expiry of about two years, the centre has done nothing, even though meanwhile, a number of petitions were submitted for the problem being faced by about thirty thousand fishermen living on the banks of these two rivers in Nadia district.

The NGT was set up in 2010 under Article 21 of Constitution by Indian Parliament that assures the citizens the “right to a healthy environment” for expeditious and effective disposal of cases pertaining to protection and conservation of environment, natural resources and for enforcement of legal rights to provide relief and compensation for damage connected therewith.

The Bangladeshi sugar manufacturing company is located on the bank of river Mathabhanga in Darshana town, where it discharges the waste. The waste flows into India through Mathabhanga River that entered Nadia in Gede. After flowing up to Pabakhali (19km), Mathabhanga divided into Ichamati and Churni. Ichamati enters North 24parganas to meet Bay of Bengal (272km) while Churni meets river Hooghly flowing about 56 km through Hanshkhali and Ranaghat. The entire 75km stretch from Gede to Hooghly remained polluted throughout the year due to discharge of effluent.

As the pollution in the river largely affected fishing, the sole source of their income, the fisherman in a mass convention on Tuesday in Ranaghat have unanimously decided to file the petition before the NGT accusing the centre of ‘callousness’. At the same time, they have decided to demand a monthly compensation of Rupees five thousand when no fishing could be possible due to pollution.

Nadia district Secretary of Dakshinbanga Matsyajibi Forum Swapan Bhowmik said, “The pollution told upon on the survival of the fishermen. The NGT two years ago advised the centre to talk to Bangladesh on the issue, but it done nothing. The sheer callousness of the centre to execute the verdict created a crisis for survival to the fishermen. So the centre should pay them compensation so that they could live. There is such provision in the NGT clauses”.

Dilip Halder, a fisherman and member of the forum said, “The waste discharged by Sugar Company has been causing enormous damage to the fishes and human lives. Fishes are also gradually disappearing”.

“It is quite unfortunate to see that a tribunal set up with special initiative by Parliament being ignored by centre. A tribunal set up with great objectives being lost its importance because the centre is acting in callous manner. Centre should try to understand that the water in these two rivers is not suitable for survival of any fish and plants”– Bibartan Bhattacharyya, Nature activist ,

A test by state pollution control board in 2016 indicated that water of Churni  is highly polluted having bio-chemical oxygen demand in the water as high as 12 mg/L (against a normal of 4-5 mg/L) due to organic substance.

“In such condition chances of survival of fishes are very low. The water is high risk for fishes and plants”, said Soumya Dutta, an environmental scientist with New Delhi based Public Advocacy Initiatives for Rights and Values in India (PAIRVI). The organization that works for rights based approach also tested the water of the two rivers recently that indicates that condition of water is “very poor and acidic in nature mingled with bad organic substance”.