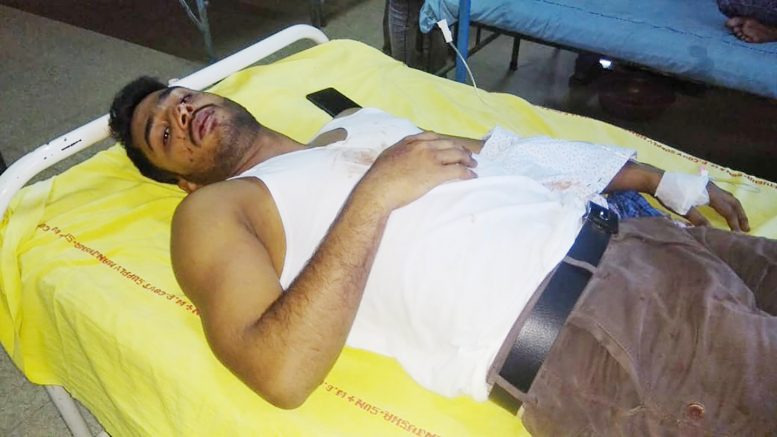 Souvik Kundu at hospital in Krishnanagar

Krishnanagar, Aug. 7: Police have arrested four senior students of Krishnagar based Bipradas Pal Chowdhury Institute of Technology (BPCIT), a state government aided polytechnic college, on the basis of a complaint lodged by its principal against five after they allegedly beaten up a first year electrical engineering student on repeated occasions because he “dared” to attend the institute without buttoned sleeves obeying their “instruction”.

To punish the ‘errant’ new comer, the five students led by Arpan Biswas and Pradip Biswas allegedly beaten up Souvik Kundu, son of a ticket examiner of Eastern Railways from Nabadwip, in the morning a little after the classes began. He was beaten up again in the afternoon when the students came to know that Souvik has lodged complaint against them and based on which the anti ragging committee of the institute that met in the afternoon decided to lodge FIR against them.

This time Souvik was attacked at about 3.30pm when he was leaving campus for home. The five students blocked his way and kicked and punched him until he started bleeding and fell unconscious . Teachers rushed to rescue him and called police, who took him to Saktinagar district hospital and admitted him there.

Nevertheless, the five seniors followed him there inspite of police presence and threatened Souvik once again of dire consequence as well as the principal Narayan Saha. A little later Saha forwarded Souvik’s complaint to the police station and simultaneously lodged a separate complaint with police against the five students as per the recommendations of the anti ragging committee of the institution.

Nadia’s police superintendent Rupesh Kumar said, “We have arrested four accused and looking of the remaining one. They will be produced before court tomorrow”.

A doctor at the hospital said, ‘Souvik has injury on his nose that suffered a rupture inside due to punch, he has multiple injuries on his face and head. But, his condition at present is stable”.

Trouble began for Souvik since August 1 when classes for first year started. On the day some senior students issues certain “instruction” to the new comers. Souvik said, “They started dadagiri threatening new comers to follow their instruction. I was told to come with buttoned sleeves. But, today I was tired after a tiring journey due to bus strike. I was feeling hot and at the same time I had fever. So I kept the sleeve folded below the elbow. This irked them and they called me to start beating random. I lodged complain against them, for which they beaten up me once again n the afternoon”.

Principal Narayan Saha said, “After the victim student complained of the attack, the members of the anti ragging committee met and decide to lodge FIR. Some teachers who were present during the incident identified the students also. But, the students were so desperate that they attacked the victim again and also threatened me of dire consequences. But we will not compromise with any attempt of ragging in the campus”.

Before his arrest Pradip Biswas, one of the accused students said, however, ruled out the allegations. “There was a problem in the morning, which was sorted out. But, later while leaving campus, Souvik abused a fresher girl which some of his classmates protested. This led a scuffle when we rescued Souvik and took him to hospital. We are being framed plan fully”.