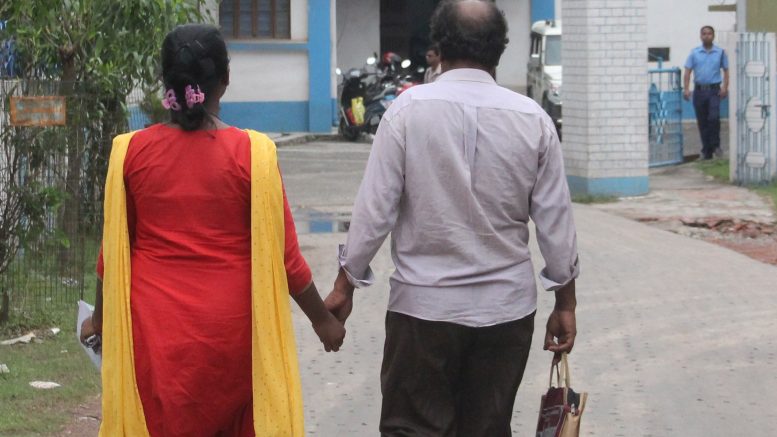 The girl entering office of police superintendent in Krishnanagar on Saturday.

Krishnanagar, July 28: A class ten girl from Nadia’s Amghata who has been forced to abstain her school for over past one week due to an alleged threat of kidnapping and acid attack by a youth of her locality, walked to office of the district superintendent of police in Krishnagar on Saturday morning along with her father and lodged a complaint seeking help so that she could continue study.

The panicked girl, who would appear Madhyamik examination in next year, gathered courage on Saturday morning and visited the SP’s office after the spurned ‘Romeo’ on Friday evening threatened to kill her father when he was returning home. As the SP Rupesh Kumar was busy in a meeting, senior police officials had given a patient hearing to the panicked girl, who was later sent to Krishnagar police station where her father lodged a complaint.

On the basis of the complaint , Krishnagar police started a case against accused Rakesh Seikh, son of a mason in Amghata-Shyampur village. However, the accused could not be arrested till late in the evening.

Trouble began for the class ten girl of Amghata Shyampur Girls’ High School early this month when Rakesh Seikh started making indecent proposals to on her way to school and private coaching.

The girl said told newsfromnadia.in, “He used to stop my cycle on the way and insist me to make an affair with him. But, as I refused his proposals, he started threatening me to burn my face with acid. He has recently made a morphed picture using my picture with one of him and made it viral in the social network and also circulated it in the locality. When I raised objection, he threatened to slash my face with a blade. All these made me panicked that compelled me to stop going school and private coaching even though it is seriously affecting my study for next year’s Madhyamik Examination”.

“However, today I decided to seek police help as Rakesh on Friday night threatened to kill my father. I cannot bear it anymore”, the girl said.

Girl’s father, a building material supplier in Tantipara, said, “I on repeated occasions requested the youth not to disturb my daughter. I also requested his parents and local panchayat member. But, all of them made fun of us”.

SP Nadia Rupesh Kumar said, “We have received the complaint. An inquiry has already been initiated into the matter. Necessary action will be taken as per the law against the offender”.