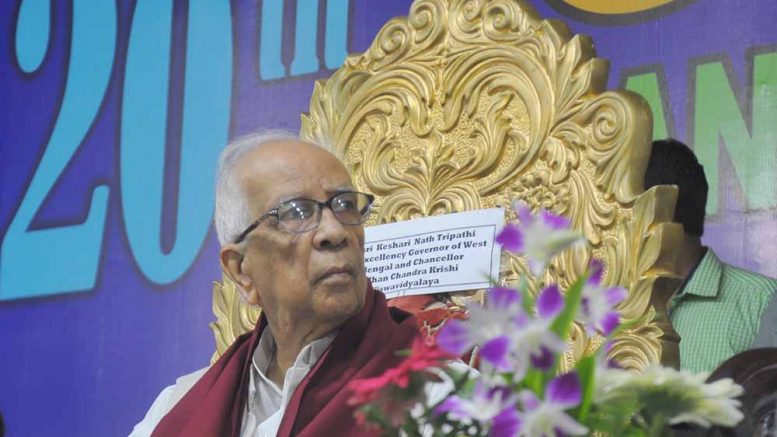 Mohanpur, Oct. 23: Bengal Governor Kesharinath Tripathy today expressed his concern over the degradation of agricultural resources like soil, water and other factors associated with productivity that has been affecting the crop production in the country. Speaking at the 20th convocation of Bidhan Chandra Krishi Viswavidyalaya as the Chancellor of the University, he said: “While the population of the country has been escalating at an alarming rate, the average growth rate of food grain production in this background is not satisfactory”.

He prescribed ‘more production’ as the remedy to the problem. However, at the same time, expressing concern, he said: “The problems of soil erosion, declining soil health, water pollution affecting the sustainability of agriculture”.

He said that ‘expanding area under cultivation could be a solution to ensure more production, but in India this has become next to impossible”

He also told the students about the need of a way out from the problems ‘arising out of excessive rainfall or drought”. A student receiving degree from the Governor (Pranab Debnath)

affecting the agricultural growth. He said: “The serious problems of soil erosion, declining soil health, water pollution affecting the sustainability of agriculture which becomes more relevant under changing climate scenario”. “Future generation will judge us harshly if we fail to uphold our moral and historical responsibility”, he added.

d to blend it with their modern scientific learning. He told the students: “Mind it that our modern agriculture is only two hundred years old, whereas, the farmers have carried their knowledge and skills through their sweat and blood over more than twelve thousand years. One should not forget to respect the knowledge and wisdom of the farmers and their forefathers. Learn from the intricacies of traditional agriculture blending with your scientific orientation”.

“His observations appears to be associated to Uttar Pradesh. There is no deficiency as such in crop production in West Bengal” –Pradip Majumder, WB Govt’s Advisor on Agriculture

Earlier the Governor handed over D Sc (honoris cause) to eminent scientist and chancellor of Central Agricultural University of Imphal professor Ram Badan Singh. Over 300 hundred students today received degrees and awards at the convocation.