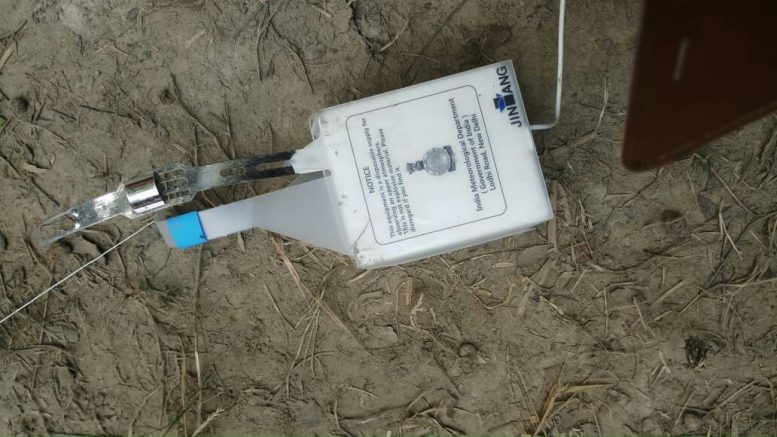 Santipur, Dec. 17: Panic gripped the residents of Gayeshpur-Hijuli village in Nadia’s Santipur on Tuesday morning when the local residents noticed a suspicious object fitted with a battery and a blinking light lying in a mango orchard. The object sent local residents into a tizzy as they thought it as an explosive attached with a timer that was allegedly dropped from a helicopter passed over the sky in the area during the wee hours.

The villagers alleged that the suspected explosive device is dropped to unleash panic among them. However, the later it turned out to be a GPS Radiosonde, a weather device that observes and measures different parameters in the upper atmosphere. A GPS Radiosonde is an upper-air sounding instrument for measuring various types of meteorological data; wind speed, wind direction, pressure, temperature, and humidity, which are calculated from the speed of travel and altitude obtained by GPS positioning techniques. The device is carried into the atmosphere generally by a weather balloon by the meteorological department to measure the atmospheric parameters and transmits them to a ground receiver.

Nevertheless, unaware of the identity of the device, panicked villagers gathered in the mango orchard before informing the police.

Sikha Biwi, a young homemaker said, “The blinking light with bip sound reminded us of the time bomb which we on several times watched on films. We are so panicked that an elderly man also fell unconscious. We suspect that the device was airdropped by the helicopter that flew over the sky in the area a little ago”.

Feroz Seikh, a Trinamul leader and former panchayat member said, “We are so too afraid even to touch the device and to examine what was written there on its body. It was looking like a time bomb. The people in the area apprehended that it was a device airdropped to unleash fresh tension in the area which is already in a boiling situation due to confusion over the implementation of the Citizenship Amendment Act”.

A police team later arrived at the spot and took the device with them to Santipur police station. Examining the device the police officials relieved the villagers of the tension.

An officer of the Santipur police station said, “We found that the device is the property of India Meteorological Department. It is a disposable equipment. There was a clear notification printed on the body of the equipment that it is not an explosive material and advised to disregard it if found anywhere. It is really surprising that despite such a clear message of why people became so much panicked”.

“We later appraised the villagers not to be panicked and also not to spread any rumor on anything which unfounded and out of mere suspicion. We have been maintaining a close watch in the area since the morning” said a police officer of Santipur police station.

An official of the Meteorological department in Calcutta said, “A GPS Radiosonde is often launched by us for different observations in the atmosphere. The device is absolutely harmless. We nevertheless cite a notice on its body so that people do not feel panicked if found anywhere”.