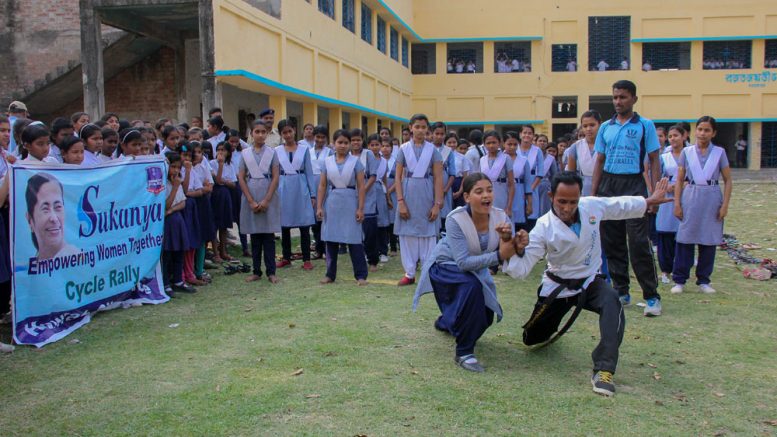 Goutam Bhattacharjee imparting basics of self defence to school girls

Krishnanagar, March 24: An assistant sub inspector of Howrah Police Commissionerate and an employee of state refugee and relief department of Howrah district administration are on a mission to encourage grown up school going girls to learn free hand self defence techniques so that they could save themselves from any unforeseen attack and sexual atrocities in odd situations.

With the support of Howrah Police Commissionerate ASI Krishnapada Mondal (33) and a clerk of RR department Goutam Bhattacharjee (38), who is also a karate trainer, have been visiting girls’ schools launching 1250km long cycle journey beginning from Coochbehar on March 8 to make the girls aware about the state government’s Sukanya scheme that aims to impart self defence skills for school girls. In October 2017 Chief Minister Mamata Banerjee launched Sukanya scheme with an objective to build up confidence among girls of class 9 to 12 by imparting self defence training like Karate, Taekwondo, Jujitsu. The project was actually designed to prevent sexual harassment, eve teasing and trafficking of girl child.

The duo would visit 100 schools as part of their mission located in 11 districts. On Tuesday they entered Nadia and visited four schools in Nakashipara, Santipur and Ranaghat. They left Nadia on Thursday to move ahead toward North 24Parganas with the mission. They would conclude journey at Nabanna on March 28.

“The recurring incidents of sexual atrocities on school going girls, physical assault on them often published in media give me lot of pain. As a karate trainer I always felt that girls needed to learn such free hand training. The Sukanya scheme launched by chief minister Mamata Banerjee said the same what I always felt. Then I decided to take help of this scheme to create awareness among school girls. I got a big support from Krishnapada. We then approached Commissioner of Howrah Police Devendra Prakash Singh actually helped us to materialize this mission”, Goutam said.

Krishnapada Mandal said: “During our short visit to the school we are showing the girls some basic self defence techniques. However, they need specific training for it. But, most schools have no trainer. So we would appeal the state government so that schools are provided with trainers”.

Howrah Police Commissioner Devendra Prakash Singh said: “These two men have taken a great initiative to create awareness. It is true that schools have no trainer. As per the scheme, trainers from local areas will be arranged to train the girls”.

Class ten Students like Chumki Biswas, Sanchita Biswas, Arpita Sarkar of Ramnagar Milanbagan Siksha Niketan in Ranaghat were elated when the duo shown them some basic self defence techniques. “It would be great if school arrange for karate training which will develop my confidence”, said Sanchita.