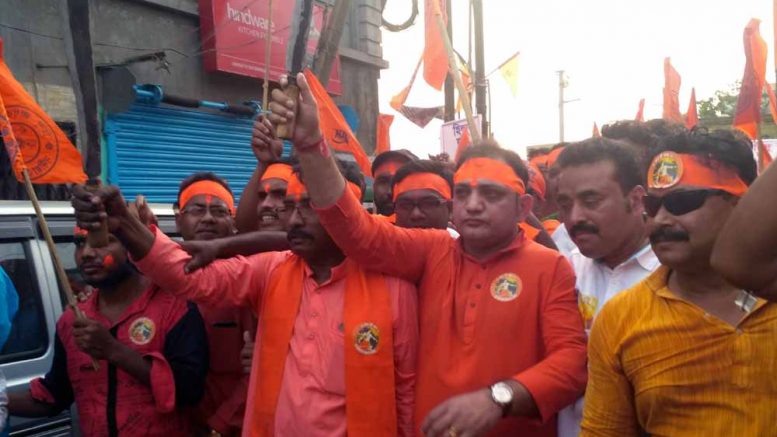 Ranaghat/Krishnanagar, March 25:The Ram Navami literally turned to be a major festival as the event was celebrated on Sunday on a large scale across the district and in the state as a whole courtesy Sangh Parivar and the ruling Trinamul Congress, which took on road chanting ‘Jay Sri Ram’ slogans out of its political compulsion.

The Hindu Jagaran Manch, a wing of Sangh Parivar which organized the rallies on the occasion of Ram Navami, however, outnumbered the ruling Trinamul Congress in terms of number of participations in the rallies.

In Krishnanagar, the Sangh Parivar had drawn about ten thousand participants, while in Ranaghat around three thousand ‘Ram Bhakt’ walked in the rally. The Sangh Parivar organized two other rallies, in Bethuadahari and Phulia but those received lukewarm response.

In total Sangh Parival along with its branches organised Ram pujan at 189 places and distributed prasad.

In reply, Trinamul Congress organized three rallies in the district with Ranaghat appeared to be the biggest one with about one thousand people walked in the rally led by local MLA Sankar Singh and civic body chairman Partha Sarathi Chattopadhaya. The other two rallies they organised in Chakdaha and in Gayeshpur, where about five hundred bike borne Trinamul workers took out the rally on the occasion.

They jostled with police when the later tried to recover the arms.

Speaking to NfN BJP leader Raju Banerjee said: “Carrying weapons in Ram Nabami is a tradition. We will never obey Mamata Banerjee’s instruction against carrying weapon. She is not our religion head”

Police, however, seized two hasuas eventually from the BJP workers.

Trinamul MLA from Ranaghat Sankar Singh said: “We have taken on the road to save the Hindu religion and to make the people aware so that they are not misled by a political party, which has been for the past few years deliberately using the Ram Navami festival as its political agenda”. Ranjan Banerjee, president of Nadia unit of Hindu Jagaran Manch said: “Political compulsion forced the Trinamul leadership to chant Lord Ram’s name and to walk in the rallies for him.  Trinamul has become afraid because the Hindus are being gradually united. Earlier the Hindus were disintegrated, but the appeasement policies of the Trinamul led government created anger in their mind and forced them to come together. Ram Navami is the occasion for pride and protest against those appeasement and oppression”.