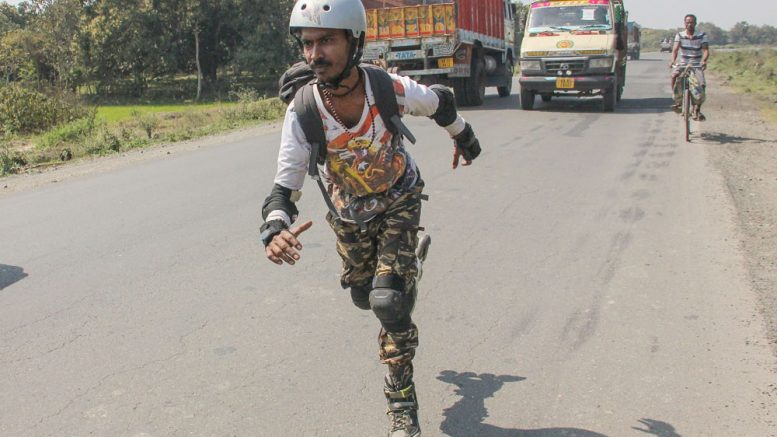 Krishnanagar, Feb. 26: A 30 year old tailor from Howrah’s Chengail has been travelling to district riding over his roller skates through the busy roads like Kona Expressway, Durgapur Expressway and National Highway appealing the drivers and motorcyclist to drive safe to save own life and others.

Partha Bhattacharjee launched his journey from his hometown in Chengail on Sunday and travelled over 130km to reach Nabadweep on his roller skates over Durgapur Expressway and took breaks at the road side dhabas to appeal the drivers to follow the road safety measures as the chief minister has envisaged.

The young tailor on Monday morning resumed his journey from Nabadweep, reached Mayapur from where he began journey and travelled over 120km over the busy NH34 in an endeavor to make people aware to develop the road security measures.

During the last two days he travelled about 280km and appealed people at regular breaks.

“I am taking breaks at the dhabas and being asked by the people who found to be curious about me witnessing a man skating on roads, with which they are not quite familiar. I am using these opportunities to interact with people and appealing them to be careful and restrained enough while driving”, said Partha.

“I have been travelling on my roller skates during the past 15 years and found the drivers and motorcyclists very indiscipline. They are very crazy which made them unconcerned about the security. So I am humbly appealing them to be disciplined and restrained so that they could overcome the craze for speed and to beat the other on road”, Partha added.

He said: “If people become disciplined there will be no accident and no unruly traffic on the road”.

Partha, who is higher secondary passed, learnt skating from private institute in Kalitala area in Calcutta. He had an ambition to become professional skater. However, he could not pursue it owing to poverty.

“If the drivers become disciplined and roads are also made sleek, there would be no loss of life on the road” – Partha Bhattacharjee.

“I have planned to use my knowledge to for benefit of society. My objective is to use roller skating to spread social message like the “safe drive” programme and at the same time to popularize roller skating as sports event”, he said.

However, Partha, who planned to visit Birbhum next, laments about the poor condition of the road at many stretches on NH34 that causes bitter experience to him. He also feels that poor condition of road is also contributing to road accident.

“If the drivers become disciplined and roads are also made sleek, there would be no loss of life on the road”, Partha added.