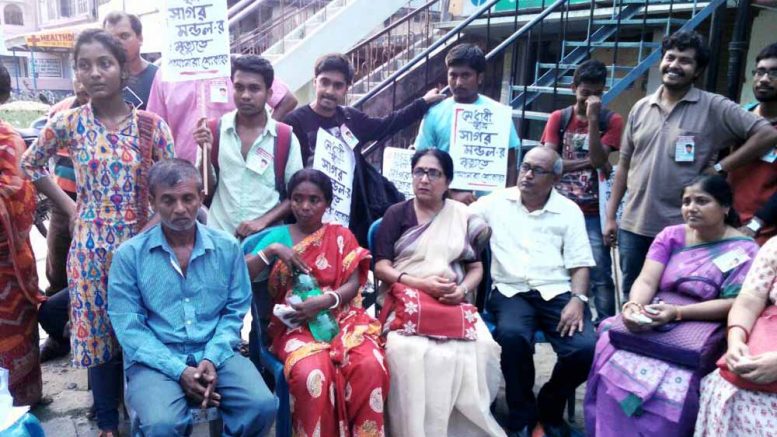 Sagar's father Susanta Mandal with other leftist intellectuals at IISER in Kalyaji. Picture by Palash Sarkar Kalyani, May 15: A team of leftist intellectuals today marched to the Indian Institute of Science Education and Research-Kolkata campus and submitted a deputation demanding an independent and proper inquiry into the alleged suicide of Institute ‘s second year student Sagar Mandal.

A large section of residents from Sagar’s native village Fatehpur also joined the march under the banner “Justice for Sagar Mandal”. The left intellectual team included members of “Save Democracy”, “Paschimbanga Samajik Naya Manchester” and Students Federation of India (SFI).

A team of villagers later accompanied them and marched five kilometers silently up to Jagulia on NH34 more from IISER-K’s main gate at Balindi and organized a protest rally there accusing the institute and police authorities for making deliberate delay into the ongoing investigation of alleged murder complaint lodged by deceased Sagar Mandal’s father Susanna Mandal.

Sagar was found hanging inside a toilet on the top floor of his hostel, Nivedita hall on May 1. He was scheduled to appear in the fourth semester earth Science paper o n the day, but went missing early in the morning. His classmates found the body after the examination, which he did not appear.

Today speaking to the media persons Bharati Mutsuddi said: “More than a fortnight is over, but the mystery behind Sagar’s death is yet to come clear. It appears that Police deliberately making delay in investigation. A lot of questions are still remained unanswered. Like Sagar’s parents and hundreds of villagers, we also do not firmly believe that Sagar had committed suicide. Even if he committed suicide, what led him to do so need to be known as the apparent reasons being fed by the IISER-K authorities in the media are not at all accepted. People want to know the mystery…Is it due to any caste based humiliation or for his financial weakness. We hope that apart from the police investigation the IISER-K authorities should conduct an independent probe to solve the mystery behind Sagar’s death as well as to save other students in future too”

Sagar’s sister Rekha, a BA final year student at Haringhata College, said: “It appears that the IISER-K  authorities are trying to hide fact and influencing the police investigation into the murder complaint. It is due their role police avoided to take murder complaint. The two reports of the fact finding committee on death of Sagar with different versions submitted to the ministry of human resources development have also made our suspicion strong about sincerity of the IISER-K into get a clear picture about the death of my brother.”

A senior professor who was a member of the fact finding committee said: “At present we could do little. We too are waiting for police investigation report and the viscera test report of Sagar’s corpse. The future course of action will be decided only after submission of police before the court. In case of any foul play behind the suicide, an independent internal probe cannot be ruled out”