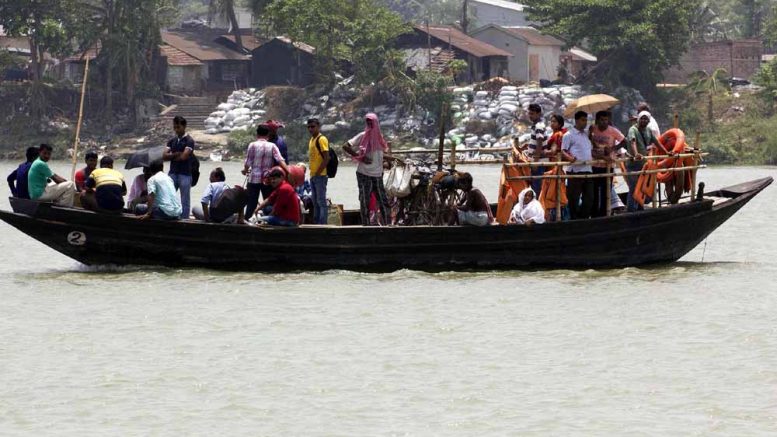 A rally in memory of Kalnaghat capsize victims. Picture by Abhi Ghosh

Santipur, May 15: A boat capsized in Kalna ghat of Burdwan in the river Hooghly last year that claimed 21 lives still appears to be not enough for Nadia and Burdwan administration to be stern enough to force the ferry operators for adopting precautionary measures.

A number precautionary security measures were prescribed by the administration after coordination meetings held between Nadia, Burdwan and Hooghly district for ferry ghats located on the either side of the river in these districts. But, very little could so far been implemented due to sheer negligence by boat operators, passengers and by the district administrations.

On May 14 night last year 21 persons were drowned when a motor operated country boat capsized at Kalna ghat of Burdwan on its way to Nadia’s Nrisinhapur ghat in Santipur while ferrying devotees returning from a annual religious soiree.

On the first anniversary of the mishap on Sunday members of Santipur Nagarik committee and two other organizations took out silent rallies protesting the administrative negligence.

Somenath Kar, a member of Santipur Nagarik Committee said: “The Kalna ghat is still remained most vulnerable for mishap. A lot of precautionary measures were introduced, but nothing visible here. The police prefer to remain silent, while passengers sail without safety gears”.

An official of the Nadia administration said: “12-point guidelines were issued after the mishap for strict compliance. These include not to carry passengers more than capacity of boat, no passenger to be allowed to sail without lifejacket, posting of guard, system (gate) to control rush, installation of public address system, installation of CCTV camera, installation of flood light and generator. But, Kalnaghat authority done nothing except purchasing the life jackets, but never encourage passengers to use it.”

Saturday and Sunday, however, were rare exceptions for passengers at Kalna ghat as special arrangements were made by the Nadia and Burdwan district administration for them due to annual religious soiree. Large number police personnel deployed. Boats were replaced by vessel for ferrying passengers, who, however, sailed without lifejackets in front of police officers.

Ranjit Debanth (45), who survived last year’s mishap said: “I regularly go to Kalna from Nrisinhapur ghat. Today I was asked to wear it, but there were only a few available”

While Santipur-Guptipara ghat operator has implemented all the guidelines and insisting passengers to use the lifejackets, the operators at Santipur-Kalna ghat and others are little bothered about security.

But, Guptipara Ghat Manager Shyam Saha said: “We made it clear to passengers that no sailing permissible without lifejacket”.

Sub divisional police officer of Ranaghat Amandeep admitted the loopholes. He said: “There are problems, nevertheless, situation gradually improving. We are trying to sensitize passengers and boat operators about mandatory safety provisions”.

Santipur municipality chairman Ajoy De said: “The administrative control of either side of Kalnaghat is under Burdwan administration. We have repeatedly told them to ensure safety measure, which, however, yet to become effective properly”.

Sub divisional officer of Kalna Nitin Sinhania said: “There are certain infrastructural drawbacks at the Santipur side which we are trying to improve. The tendering process has been completed. We are also sensitizing passengers and boat operators aware about the safety provision. We are now contemplating to penalize boat operators for any violation of safety measure and passengers as well if found sailing without lifejacket”.