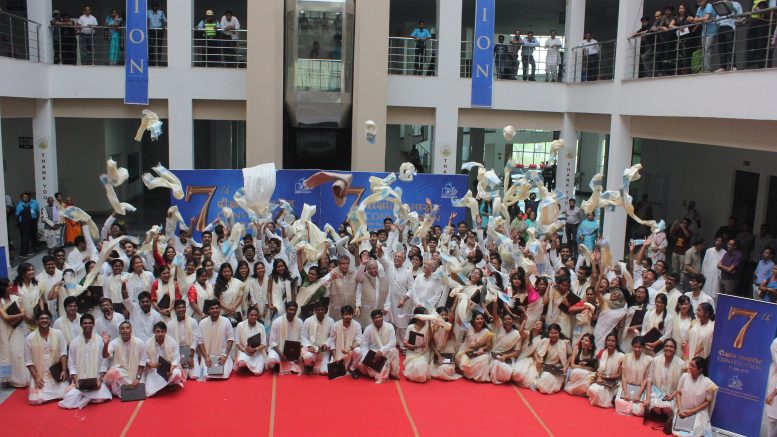 Students of IISER-Kolkata who received their degrees celebrating

Mohanpur: The Indian Institute of Science Education and Research-Kolkata (IISER-K) is all set to introduce “Humanities” as a independent department at its Mohanpur campus so that students can properly study different subjects under it as their elective subjects while undergoing their BS-MS dual degree course at the institute.

The senate members of the IISER-K have decided that various subjects under humanities like English, Economics, Social Science and others would be offered for the dual degree course student who can study the subjects “properly”.

session.  IISER-K Director Professor Sourav Pal announced introduction of these two new departments while speaking at the 7th convocation of the Institute at its Mohanpur campus on Tuesday.

IISER-K’s Director Professor Sourav Pal said, “We are introducing two departments. But for humanities we are not offering any degree courses on subjects under humanities now. But, students will be able to study the subjects as their elective papers while doing their BS-MS under other faculties. Students of BSMS are needed to study subjects under humanities in every semester. But there was no independent department in our campus. We used to hire faculties from outside. Now students will have their own set up here”.

“Full-fledged degree course under some subjects of humanities may be considered later”, he added.

The senate members of the IISER-K who also hold a meeting at the campus, have decided that students who have done their post graduation on different subjects of humanities can do their doctoral research at the campus.

“We are introducing two departments. But for humanities we are not offering any degree courses on subjects under it now to the students” – Prof. Sourav Pal, Director, IISER-K

“We have decided to invite students from outside universities who done their PG degrees on different subjects of humanities Master degree holders from different faculties of humanities like Philosophy, Economics, Psychology, Sociology to do their research work with us”, Director Pal said.

“Our objective is to explore newer avenues in study and research work to develop holistic human resources for the future”, Pal added.

Appreciating the initiative, chief guest at the occasion and former President of Indian Academy of Sciences Professor Ramakrishna Ramaswamy said, “It is an extremely new aspect which will add new dimension in studies of different fields of social science”.

Earlier 151 students of different faculties were handed over the BS-MS degree. 16 students also received their IPhD. Jhankar Jeevan Prakash was adjudged the best student for over all performance and awarded a special medal for excellence. Subhajit Bhattacharjee was awarded gold medal for best academic performance.