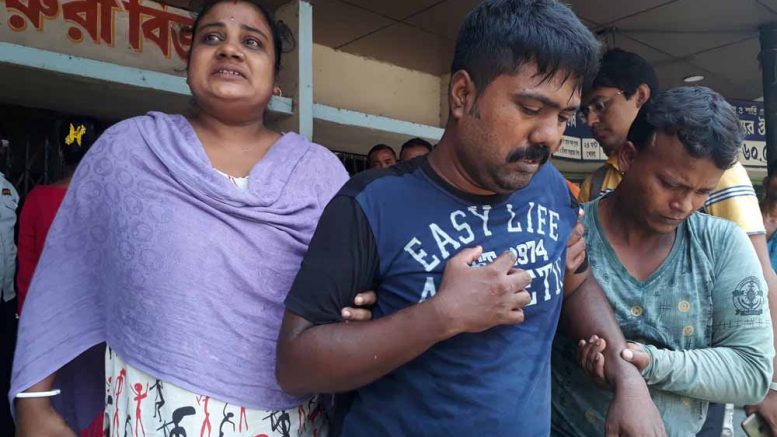 Kalyani, June 13: Services to patients at both outdoor and indoor were seriously hampered in College of Medicine and JNM Hospital in Nadia’s Kalyani on Thursday as senior doctors had also joined the interns expressing solidarity to their movement that began following fatal attack on one of their colleagues at NRS Hospital on Monday night.

During over last 48 hours no patients were allowed admission to the hospital this includes a severely injured woman with burn injury, who was returned on Thursday without treatment.

On Thursday morning irate relatives of the patients blocked an arterial road in front of College of Medicine and JNM Hospital in Kalyani town for about half an hour until forced them to remove it. Demonstration by interns and students

In College of Medicine and JNM Hospital services at both OPD and emergency was completely suspended until about 4pm, when only one senior doctor began visiting patients at the emergency department that too ‘unofficially’ without issuing ‘ticket’.

Later in the afternoon, the students and the interns withdrawn their demonstration and vacated hostels gradually apprehending attack on them during the night.

“We are not feeling safe in the hostels. We apprehend that miscreants could attack us at hostel during night. Our agitation would continue and we will not return to hospital unless the chief minister personally visits NRS hospital and talks to our agitating colleagues there”, an intern said.

Around five hundred students of four years and interns vacated the hostel literally paralyzing the health care facility at the JNM Hospital in Kalyani.

An intern said, “The aggressive handling of the situation by chief minister while visiting SSKM hospital made things worse for us”

Medical superintendent Avijit Mukherjee said, “We persuaded them to change their decision but they are afraid of attack and decided to leave. This would hamper classes and health care as well at the hospital”.

Chief minister later in the day made a written appeal to all doctors at the Medical College hospitals in particular to resume work. In the letter she stated, “I will be obliged and honoured if you all please take full care of the hospitals. Hospitals must run smoothly and peacefully…“.

Meanwhile, in most of the state run hospitals in the district service remain elusive to the patients except in some hospital where a handful of doctors visited emergency.

A woman who came to the College of Medicine and JNM Hospital taking her husband for treatment said, “My husband suffered injuries on head and chest in motorcycle accident. He is in critical condition. I prayed the doctors to take his care, but they asked me to go elsewhere. We are too financially week to afford the cost of treatment at private hospital…I don’t know if he would get any treatment of not”. The woman later took her husband to Ranaghat sub divisional hospital hearing that the emergency service is being provided there.

At 4pm, the emergency section of College of Medicine and JNM Hospital was opened. However, no intern joined duties. Only a handful of senior doctors started visiting patients. However, no patient was admitted.

“We have started visiting the patients at emergency. But, no admitting patients as until the interns resumed duties it would difficult to provide service inside”, a doctor on anonymity said.

Situation was largely same in most of the state run hospitals in the district. However, emergency services were provided in all the hospitals, except in College of Medicine and JNM Hospital in Kalyani.