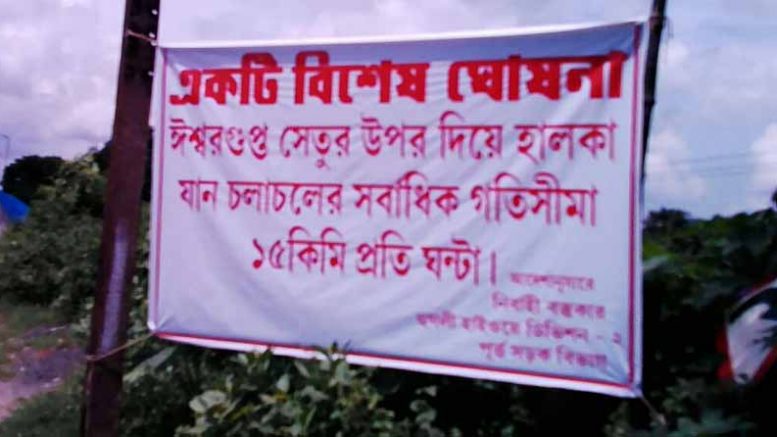 Notice issued by the PWD restricting movement of vehicles

Kalyani, Aug. 25: The Ishwar Gupta Bridge that connects Nadia (Kalyani) and Hooghly (Tribeni) has been closed for movements of heavy vehicles following fresh snags were detected on at least two of its girders on Thursday evening. The state public works department which looks after the bridge today said that only light vehicles like sedan and suv will be allowed to ply over the bridge with a maximum speed of 15km per hour until the necessary repair works are done. The PWD engineers, however, refused to speak about the exact nature of the snags except apprising that the bridge will remain closed for indefinite period.

The 3400 ft long (1.04 km) long Bridge was inaugurated by former chief minister Jyoti Basu during 1989 and since become the arterial link between Durgapur Expressway and NH34 via GT road. At least 2000 vehicles regularly use this bridge.

During December last year similar snags were detected on the bridge. The bridge kept closed for about six months. Normal vehicular movements were resumed in May this year only after rectification works were done. Sources said, on Thursday evening some workers attached to the toll plaza first noticed fresh cracks on the two girders which were repaired recently. The crack made the viaduct sank by over 10 inches. The toll workers informed the PWD officials, who rushed to the bridge late in the evening and decided to suspend movement of the heavy vehicles over the bridge immediately.

A toll worker said: “The Bridge was trembling as it feels during an earthquake. I found that the girders have developed defects again at the same spot where it was occurred during December last year. I immediately informed the PWD officials”

As a consequence of sudden suspension of heavy vehicle over the bridge, plying of passengers buses and goods vehicles have been stopped creating a big troubles to regular passengers and traders as well.

Since the morning today heavy vehicles are being diverted through other longer routes. Nadia district administrations have appealed the motorists to use Gouranga Setu in Nabadweep as an alternative route to access either side of the river.

“We are trying to keep one lane of the bridge open for movement of the light vehicles while taking up the repair works simultaneously”, the senior engineer said.