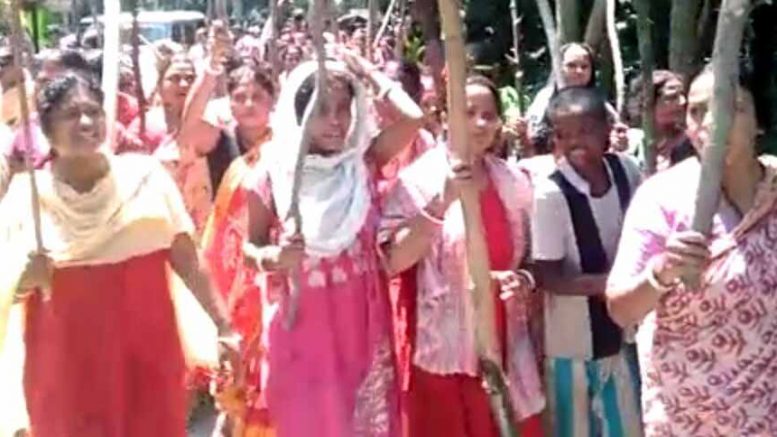 Bogula, Aug. 24: Bogula became tense after an elderly woman was found killed at her home on Thursday in the College para area early in the morning. Angry women of the locality blocked Bogula-Sahapara road and Krishnanagar-Bogula road, staged agitation and led rallies armed with sticks and brooms accusing police of inaction after they found the lifeless body of 70 year old Binapani Biswas lying in a pool of blood inside her bed room during the wee hours. The angry women also did not allow police to recover body for post mortem without arrival of sniffer dogs for investigation.

Initial investigation by police revealed that the elderly widow was killed as she most probably identified the miscreants who hit her with a blunt object on head. The miscreants ransacked her bed room and decamped with jewelries worth about Rupees 2 lakhs.

According to family sources, the deceased woman was staying with the widowed of her younger son, who died a few years ago while on job in UAE.

Ashima, the widowed daughter in law, today spotted that Binapani was lying dead on her bed early in the morning. “I was shocked to see the door ajar and found my mother in law lying in a pool of blood. There were signs of rampage inside everywhere. I called the neighbors who informed the police”.

Sumitra Biswas, a local resident said: “The area has become a den of anti socials. A number theft, dacoity attempts, snatching were held in the area. In last week another elderly woman was attacked in similar manner, who is now fighting for life at a private hospital in Kolkata. Nevertheless, police remained inactive. The women and elderly people in the area have become soft targets of the miscreants due to apathetic attitude of police”.

Officer in charge of Hanshkhali police station Anny Bose rushed to the spots, but failed to convince the angry villagers despite giving repeated assurance to nab the culprits soon.