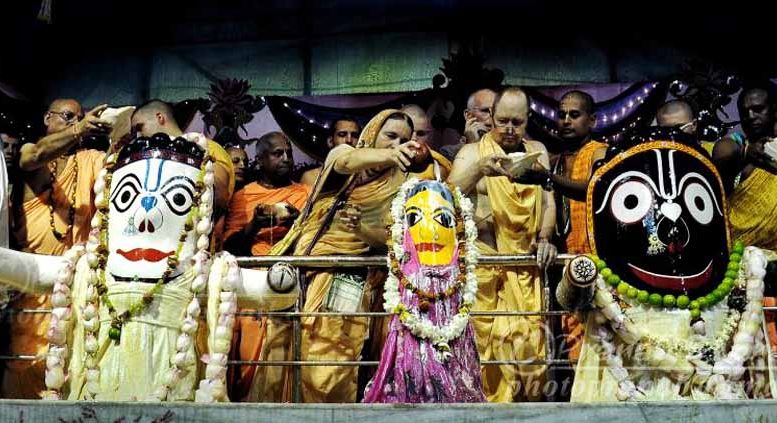 The deity of Lord Jagannath being given holy bath in Rajapur. Picture by Pranab Debnath

Rajapur (Nadia), June 9: Devotees of Iskcon across the globe today celebrated the Snan Yatra festival (Holy Bath) to mark the holy appearance day of Lord Jagannath. The main programme was organized at the Lord Jagannath temple in Rajapur village, 6km away from Iskcon’s main hub of Chandradoya temple in Mayapur, where a special bath was given to the deity amidst chanting hymns and devotional songs.

According to the “Skanda Purana” King Indradyumna installed the wooden deities of Lord Jagannath in Puri. He arranged this holy bath ceremony for the first time to mark Lord’s birth day. This festival is also simultaneously held in Puri on the full-moon day of the month of “Jyestha” of Bengali calender year.

In Rajapur, the festival began today at 4.30am with Mangal Arti and a delightful dance presentation of “Geetgovindam” by students of Bhaktivedanta National School. This followed the preparation of the holy bath.

After the deities were brought to the snan vedi, the priests headed by HG. Pankajanghri Prabhu, offered the first abhishek of various substances such as Ganga water, milk, ghee, honey, yogurt, fruit juices, scented water, and coconut water.

After this hundreds of devotees who had gathered in long queues from the wee hours of morning in front of the temple got the chance to bathe their Lords.

HG Nirmal Chaitanya Das, president of Iskcon’s Jagannath temple  in Rajapur said: “108 types of sumptuous  food items, fruits and sweet dishes and a large delicious  cake were offered to the Lord which later distributed as prasadam among the devotees who used to gather on the occasion across the globe”.