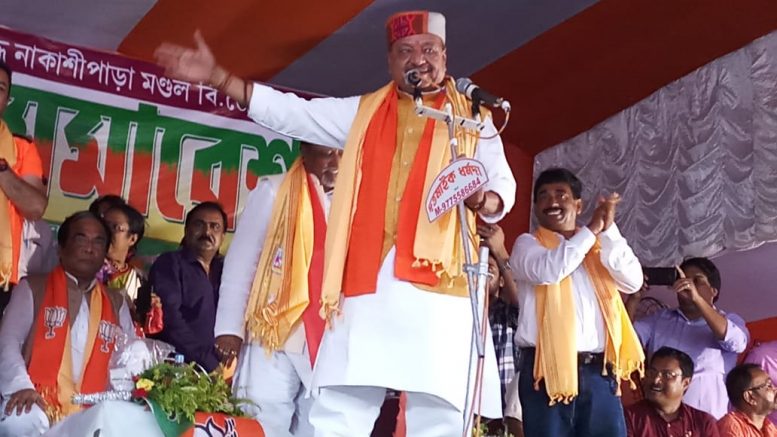 Bethuadahari, July 30: BJP’s Bengal minder Kailash Vijaivargiya has accused chief minister Mamata Banerjee of spoiling the employment opportunities of Bengali youths by allowing the Bangladeshi infiltrators to settle in the state.  He apprehends that if the Bengal chief minister allows the evicted Bangladeshis from Assam to enter Bengal, as a possible outcome of publication of draft final list of National Register of Citizens (NRC) that identified the genuine residents in Assam, scope of job opportunities would further deteriorate in the state and for which Bengali youths would never forgive her.

Vijayvargiya was speaking at a public meeting organised by the part’s Nadia district (North) committee in Bethuadahari on Monday evening. Party leader Mukul Roy was also present in the meeting.

Speaking at the rally Vijayvargiya, who is BJP’s National General Secretary, accused the Bengal chief minister for having a soft stand on the Bangladeshi infiltrators.

Union minister of home affairs Kiren Rijiju in 2016 speaking in Rajya Sabha announced that based on the available inputs with the government, there are around 2-crore Bangladeshi immigrants illegally staying in the country. Earlier in 2004, former ministry of state home affairs Sriprakash Jaiswal in Rajya Sabha had announced that West Bengal accounted around 57-lakh Bangladeshi squatters, which is so far highest in the country.

Vijayvargiya said, “Such infiltration is a big problem to us. But, if Mamata Banerjee continues providing shelters to the infiltrators, the youths once will not forgive her”. Referring to such infiltration that cause a huge influx in population, Vijayvargiya added, “Everybody knows that a large number of Bangladeshis sneaked into Bengal. A section of this operating criminals rackets. They have settled here and involved in terrorist activities and also become permanent residents in Bengal making our youths unemployed. It is unfortunate that our permanent residents have no job here because the Bangladeshi youths made them unemployed….These Bangladeshis have now become Mamata Banerjee’s vote bank. Should we allow the Bangladeshi in filtrates to stay here?”

He referred to Supreme Court’s decision to update the NRC for Assam. The final draft list which was released on Monday has accounted illegal migration of about 40-lakh people into Assam from Bangladesh.

Referring to NRC, Vijayvargiya said, “It is a great move by Assam government. These 40 lakhs Bangladeshis identified as infiltrators, who spoiled the economy of Assam”. “Assam chief minister has guts to ask its residents for self identification. There was a huge influx of Bangladeshi that spoiled the economy. They spoiled jobs for Assamese youths. So it was needed to identify the actual residents. If Assam chief minister can ask for its people for such self identification, what stops Bengal chief minister to make a same gesture for sake of its people?” Vijayvargiya asked.

“But, instead of doing so, Mamata Banerjee expressed her concern for the infiltrators. I apprehend she would allow these Bangladeshi to enter Bengal once evicted from Assam…But, my question is Bengal as Dharmashala for the Bangladeshi infiltrators? Should we allow the infiltrators at the cost of the future of our youths? You should consider this aspect”, Vijayvargiya said.