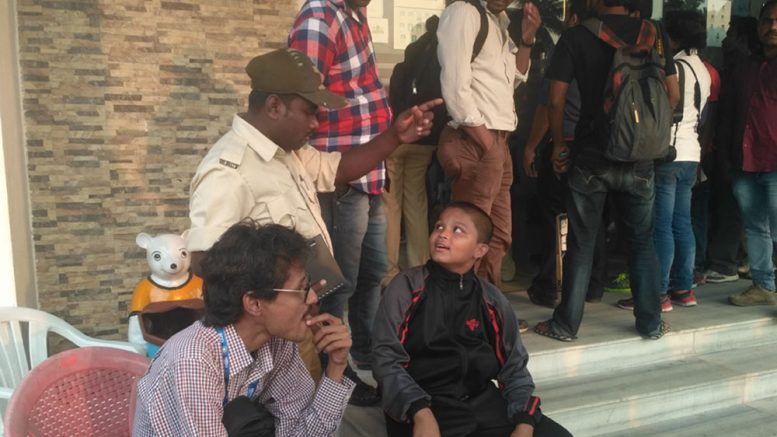 Sagar Biswas, 14, a class 9 student of Kalyani Pannalal Institution waiting outside the entrance of Bengal Cricket Academy for an autograph of Mahendra Sing Dhoni. Picture by Sovan Chaudhuri

Kalyani, March 6: On Sunday he waited up to mid night inside the Bengal Cricket Academy premise in Kalyani for an autograph of Mahendra Singh Dhoni. But, his wish remained unfulfilled.

14 year old Sagar Biswas, a class nine student from Kalyani, was beaten up by his father, yet today he left home at 5.30 in the morning to accomplice his mission.

On Tuesday he waited inside the BCA ground in Kalyani for over 11 hours and accomplished his mission with help of police officers, who even dropped him at his home in the evening to save him from a fresh thrashing by his father.

It was a different ‘duty’ for Circle Inspector of police (Santipur) Champak Choudhury, who dropped him at his home in A block.

“I am really moved watching his patience and the passion for Dhoni. I felt happy to drop him at his home where I handed over him to his mother. I requested her not to admonish her as he was with us in the ground”, said Choudhury.

For Sagar the prize of his patience came in the form of two autographs including one a signed cap gifted by MSD, who hugged the boy and told the police officers to take care of him.

Sagar, son of a small businessman and a student of Kalyani Pannalal Institution said: “I am very happy for getting autograph and for help of police uncles”

Sources said on Sunday night Sagar managed security officials to sneak inside the BCA premise at about 10pm, a little after Dhoni arrived with his team Jharkhand to play a Vijay Hazare trophy match against Jammu & Kashmir. But he failed to see Dhoni until he was forced out late at night.

Today armed with a small note book and pen Sagar urned up at the ground at about 6am for Dhoni.

He did the same thing on February 25 night and 26, but failed when Dhoni came Kalyani to play against Services.

A police officer said: “We have been watching the boy since February 25. In last night he came too. We were surprised to see him so early in the morning. We told him to leave the place, but he was desperate. We felt pity and allowed him to wait inside the premise as his innocence and passion moved us”.

Nevertheless, the coveted autograph remained elusive a little before until Dhoni left for Calcutta. The tight security did not help Sagar to access beyond entrance of BCA building.

Sagar’s persuasion finally impressed an intelligence officer, who him inside the Jharkhand’s dressing room and helped him to meet his dream icon.

“I was watching the boy roaming inside the premise since morning. After the match I saw the boy was in a gloomy state. He was requesting every official to take him to Dhoni. So I decided to try to bring smile his face”, the officer said.

Sagar said: “On February 25 and 26 I tried but failed. In last night I tried too. Nevertheless, I decided not to give up because I love Dhoni. Baba beaten up me last night, but I decided to get Dhoni’s autography at any cost. I love him. After seeing the film on his life I become a bigger fan of him. So today I left home early to try. It was ultimately a police uncle helped me to take to Dhoni”.

“It is almost a dream came true to see him so close and talking to him. He talked to me and asked if I play cricket. He signed on my note book and gives me a cap too giving an autograph too on it. I was little panicked as I apprehended that my father would beat me again as act indiscipline and abstained school today. But, the police saved me too at home also”, added Sagar