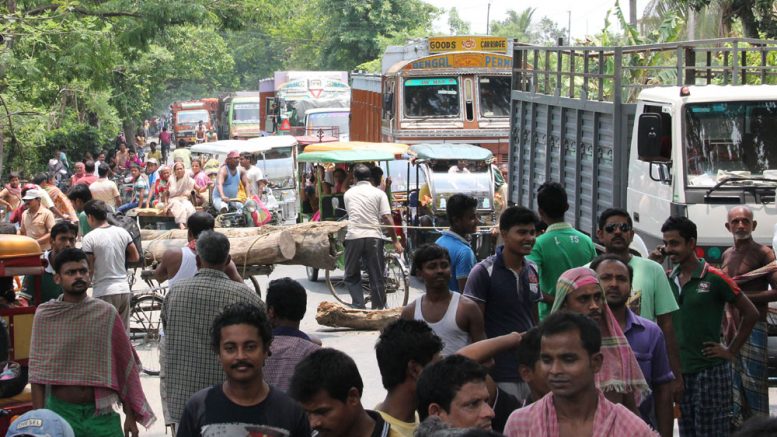 NfN NETWORK
Santipur, March 14: A mentally challenged boy from Santipur, injured in a road accident on NH34 on Monday evening, who was referred by two Nadia hospitals and eventually refused admission at NRS Hospital despite bleeding profusely from a vein injury was finally admitted to Sambunath Pandit Hospital today afternoon after his family members failed to go past the security at the SSKM Hospital to meet the Superintendent despite having a recommendation from state food and supplies minister Jyotipriya Mullick.

The minister was surprised knowing that the boy could not be admitted to SSKM despite his recommendation, but expressed happiness for his admission to Sambhunath Pandit hospital.

17 year old Nabin Das, a resident of Kalipur village of Santipur was hit by a truck on NH-34 last evening, when he went to a sweet shop with his brother in law Uttam Pal

“I was busy paying money to sweet shop when Nabin carelessly went towards road and hit by a lorry. He suffered injuries on his head and on left arm, which was fractured with vein silted and bleeding profusely”, said Uttam Pal.

The boy reached NRS Hospital with his relatives past mid-night, where he was provided a fresh dressing during wee hours of today morning. Repeated persuasion to admit the boy was ignored as his parents was asked to return at 9 am today for a fresh examination. Frustrated, they took the boy back home in Kalipur when local residents become angry over the alleged apathy to admit the boy blocked the NH-34 in protest.

“We were kept in waiting despite the serious condition of my son. He was examined at about 4am today and given a fresh dressing that stopped the bleeding. I repeatedly requested the doctors in folded hand to admit my son, but they refused. They instead asked me to come after five hours at 9am. We were frustrated about the uncertainty of the treatment and decided to come back. But people in the locality become angry seeing my son returned in such a condition and they spontaneously rushed to block the road”, boy’s father Tagar Das (49), a weaver, said.

The blockade that started from 7.45am and paralyzed traffic movement on NH34 continued up to 8.30am until minister Jyotipriya Mullick, who was caught in the blockade, met the angry villagers.

“I was in a hurry to attend a programme in Murshidabad but caught in blockade near Phulia. There were hundreds of vehicles in front and behind my car. So I came out of my car and walked a few hundred meters to talk to the agitators. Knowing about the reason, I instantly had written a letter addressing the superintendent of SSKM hospital to admit the boy. I assured them that the boy would definitely be admitted and I will monitor his treatment. I also urged them not to block roads in such manner anymore”, Mullick told NfN.

Tagar Das and his son in law Uttam rushed back to SSKM taking Nabin there, where they reached at about 11am. Nevertheless, much coveted admission to the hospital was eluded again.

Nabin’s father Tagar said: “I tried to meet the superintendent with minister’s letter. But, the security personnel misbehaved and misbehaved. They were not ready to hear me. They asked me to wait in queue and wait for our turn. There was huge crowd in the queue and the security personnel told me it would take about three hours to come our turn. I requested some police personnel for help, but they also refused help. So We then approached nearby Sambhunath Pandit hospital, who seen the minister’s letter and admitted my son at about 1pm”.

“The admission could be possible only due to help by the minister. Otherwise my son’s condition would turn critical as he is actually without treatment except some primary support since last evening”, he added further.

Mullick was surprised knowing that the boy could not be admitted to SSKM hospital. He, however, termed it as a ‘communication gap’.

He is, however, expressed his pleasure for his admission to Sambhunath Pandit hospital.

“I will monitor the treatment of the boy. I have already instructed officials of my department to go to the hospital and visit doctors and boy’s relatives to ensure no further negligence is occurred”.