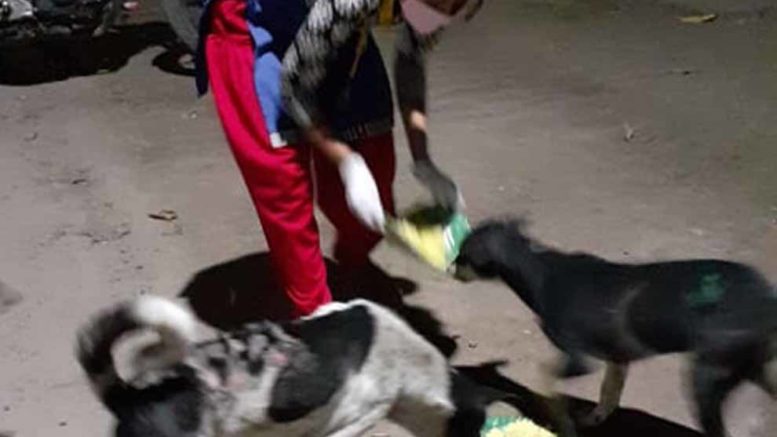 Krishnagar: Members of the ‘Krishnagar Prayash’, a dog lovers’ association with the support of the police and some like-minded persons have been regularly feeding around two hundred street dogs and homeless persons for about past three months since a day after the nationwide lockdown was announced to prevent an outbreak of the Covid 19.

Since the street dogs are largely fed on the good-hearted customers of food stalls as well as on the waste of hotels, restaurants, and eateries, a food crisis has been created for them due to the lockdown of all such establishments.

Sutanu Sarkar, president of Krishnagar Prayash, a dealer of mobile accessories said, “Our town has around two hundred street dogs. Ever since the lockdown began the survival of these street dogs has become tough. The same can be said about the homeless who largely depend on the mercy of the food stall and hotel owners. But, the lockdown has robbed their daily meals. While as human beings we have been jostling with others to arrange for food, these dogs and the homeless, many of whom are mentally unstable might end up being the natural casualty of the lockdown”.

Realizing the situation Prime Minister Narendra Modi had also appealed for feeding the animals around us. Prominent animal lover and senior BJP leader Maneka Gandhi, the former Women and Child Welfare Minister had also appealed to the people to feed the helpless animals as much as possible to help them survive. In a statement she has said, “…In the event of a lockdown, if they are not fed, many will die, creating another kind of problem”.

Prayash president Sutanu said, “This is a critical situation for the street dogs, birds, and homeless poor people. So we decided to join hands to feed them regularly until the situation normalized. All the members of our organization made a fund with a personal contribution. We then appealed officer in charge of the Krishnagar police station Raktim Chatterjee. He instantly provided 1 quintal rice and arranged help through some of his friends”.

“Advocate Avinandan Bhattacharjee on the request of the Raktim Chatterjee came forward to provide 1 quintal of rice. Some more friends have also joined us and we have decided to continue feeding them initially up to April 14 and if required beyond that too”, said Riya Goswami, another member of the organization. Sub Divisional Officer of Krishnagar Sadar Manish Verma has also made a personal contribution of Rs.5000 to support the endeavor.

At present, the members have been regularly cooking separate food for the dogs and the homeless.

“We have regularly changing items for both categories. For the homeless, we served mixed rice with egg and vegetables on Thursday, while for the dogs we prepared rice mixed with chicken. After cooking the food we packaged it in foil containers, which our members take in groups for serving on trolley vans with support of police”, he added.

While the Krishnagar police have come up helping the street dogs and the homeless, the Karimpur police led by officer in charge Parthapratim Roy also distributing rice, groceries, and vegetables to the financially weaker elderly citizens and the homeless in the town from Wednesday. “This is a mark of our respect to these people who have found it tough to survive during such unprecedented lockdown”, Roy said.