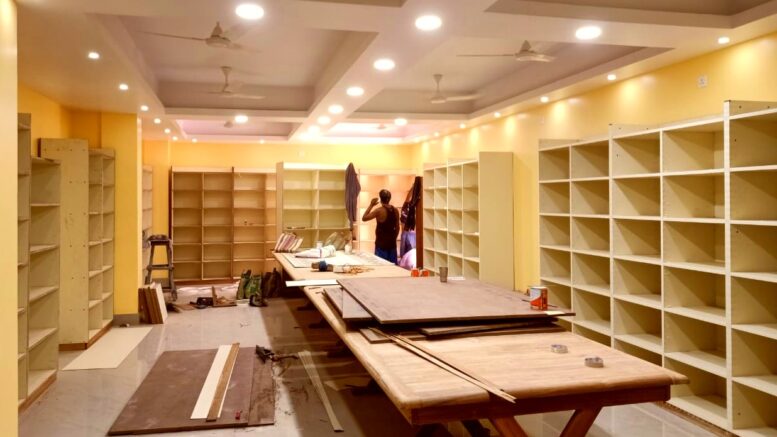 The descendants of late Naresh Nandini Sarkar having their ancestral home on RN Tagore road in the Aminbazar area of the town have decided to invest a gross amount of about Rs.50-lakh to complete the project which includes a fully decorated air-conditioned hall with a Wi-Fi facility spanned over an area of 860 Sq.Ft. equipped with over 6000 books of about 20 separate filed of studies computer, scanners, printers, and other necessary electronic gadgets required for readers and researchers. “We cannot imagine an auspicious day better than this…”, said Kanchan Sarkar, a family member, who teaches Sociology at the University of British Columbia-Okanagan, a Canadian province.

Later they submitted a written proposal to the KPL managing commit who approved it  during February this year.

“All of us had different proposals at the get together held at my sister Sanchita’s residence in Cleveland. But eventually, we zeroed on the library as proposed by our paternal aunt. We also decided that the proposed library will be dedicated in honor of our grandmother Naresh Nandini Sarkar as well as in memory of her two sons Shyam Ranjan and Biswa Ranjan Sarkar”, said Kanchan Sarkar.

“It often becomes tough for readers and researchers in rural areas to afford textbooks of different subjects. The researchers also could not access the needed books unless visiting libraries in Calcutta. So we have planned to offer a wide collection of text and resource books for the researchers, added Kanchan Sarkar.

“Our objective is to provide the best possible support to the readers and researcher. We will provide everything that an ideal modern library should have. We will even provide a refrigerator, micro oven, coffee making set so that a researcher can have refreshment during his day-long works in the library”, said Anjan Sarkar, another family member, who is a physician in Krishnanagar.

Library sources said since many members of the family are at present settled abroad, those who live in Krishnangar have come up to monitor the execution of the project.

Sanjit Dutta, a managing committee member of the KPL said, “This is an unusual gesture by the Sarkar family. People often donate books, but we never received such a huge gift for the readers”.

“We have only given them the land. The rest is being done by them. They are monitoring progress distributing responsibilities within themselves in their own way”, Dutta added.