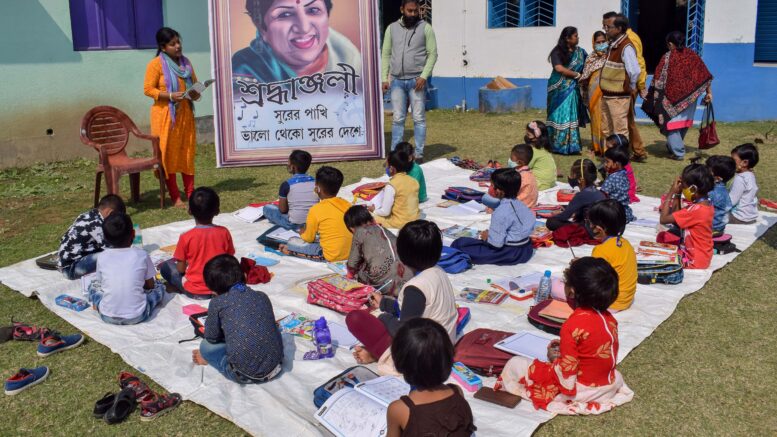 Santipur, Feb. 7: Teachers of Santipur Municipal High School (Primary Section) began the “Paray Shikshalay” programme on Monday paying tribute to legendary singer Lata Mangeshkar, who demised on Sunday. The only batch of about three dozen students of class I and pre-primary level, who attended the first day, was told about the life and works of the great singer. The school authority put a big portrait of the singer on a chair, observed silence as a mark of respect to the departed singer. Later the teachers also played some of her immortal songs in Hindi and Bengali that also include “Vande Mataram”. Speaking to The newsfromnadia.in, Prasenjit Says, an assistant teacher of the school said, “The state government instructed to begin a communication process with the students to so that they could easily adapt with the school curriculum gradually without imparting any hard lesson as they had no connection with school during the last two years. So we tried with Lataji today…It was an instant case since she died yesterday and there could be nothing better than to begin a talk and inform the pupils about her life and works. Most of the students, who are aged about 5-6, were not aware of Lataji, but they identified her with some songs. Many guardians later met me and lauded us for the initiative”. The NfN Picture.