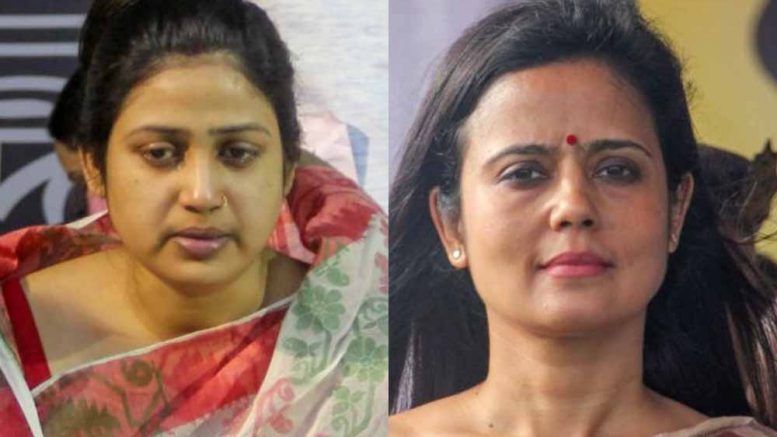 The move to nominate Rupali is being considered as a masterstroke by Mamata Banerjee to retain the Ranaghat lok sabha seat that has became a serious concern to the Trinamul leadership due to growing support base of BJP in the area as well as for the disintegrated Matua vote bank which was once a big strength for the ruling party.

On the other hand replacement of sitting Krishnanagar MP Tapas Pal was quite expected since his ‘rape and kill’ threat to opposition party workers in Nadia’s Choumaha during April 2014. His political career further damaged since arrested by CBI in connection with his alleged involvement in spongy fund schemes. Party sources, however, claimed that Pal is ill and not physically fit to fight the poll battle.

Mahua’s nomination was quite anticipated when she was assigned to look after two assembly segments under Krishnanagar constituency where party’s internal bickering has largely told up the result during the panchyat elections last year. A Trinamul insider said, “Party has no better choice than Mahua. She is quite deserving candidate. As a party MLA she has already gathered experience and quite competent to speak eloquently which will be a great help for the party at the parliament”.

“Moreover, Mahua will be able to give a good fight against the growing support base of the BJP”, he further added.

Mahua, a graduate from Mount Holyoke College from Massachusetts in USA, prior to joint politics was investment banker and also worked with JP Morgan as its vice president in New York and London.

On the other hand, Rupali is an arts graduate from Betai College, who has no experience in direct politics.

Party insiders acknowledged that it is her husband’s death that the party has decided to encash to retain the Ranaghat seat by nominating her. “Party prospect in Ranaghat is quite low due to internal bickering as well as for division in the Matua vote bank which accounts about abour 40% of the total voters”.

“A sympathy wave for Rupali may help the party to sail this time winning the seat and also it may reunite the fighting party leaders in the area”, the party insider added.

Nadia BJP’s North unit president Jagannath Sarkar said, “Sympathy cannot help to win polls. People have sympathy for Rupali but they cannot at the same time forget and forgive the Trinamul for its oppression and torture. Our fight is to save democracy in Bengal. It is quite unfortunate that the Trinamul leadership has decided to use Rupali for its political benefit sacrificing a sitting MP. In fact by nominating Rupali, the Trinamul has made our task easier…”.

Speaking to the reporters Rupali said, “I was not prepared for the nomination. I will try my best to come up to the expectation of the Trinamul leadership. I am grateful to Mamata Banerjee for the respect and love she has shown to my husband”.

Nadia Trinamul president Gourishankar Dutta said, “Nomination to Rupali is a tribute to our slain MLA Satyajit Biswas. We are hopeful that Rupali would win and complete the unfinished works of Satyajit”.