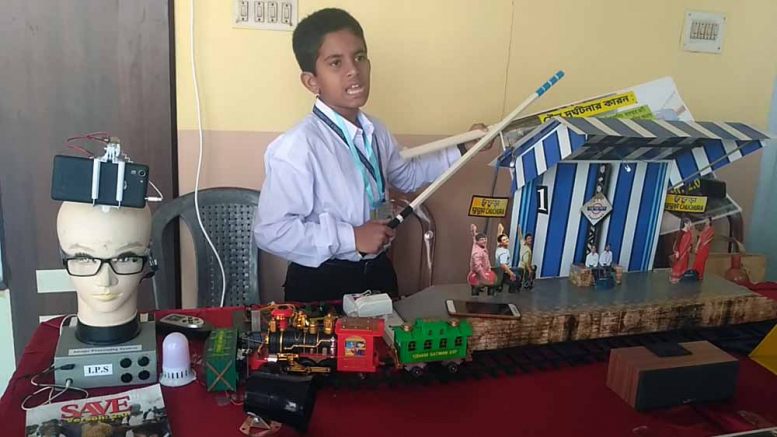 Avigyan Kishor Das demonstrates 'SAVE' at the JIS College of Engineering's Tech Show in Kalyani.

Kalyani, March 13: A class seven boy of Hooghly Collegiate School has developed a device that can automatically stop a running train to avert a possible accident in case the driver suffers a cardiac arrest and collapses being unconscious.

Chinsura’s Avigyan Kishor Das’s device, titled “Safety and Alert for Vulnerable Emergency” (SAVE) is based on “pulse oximeter”, a small device that the doctors often use to measures oxygen level in blood.

The 13 year’s boy, who bagged the first prize for “Best Innovative Project”, in a competition-cum-tech-show organized by the Kalyani based JIS College of Engineering on Saturday claims that if the “Pulse Oximeter” found oxygen in driver’s body at critical level (80 or low), it will activate the auto brake lever to stop the train and raise a strong alarm alerting the guard and passengers.

Avigyan, in front of a large number of engineers, scientists bio medical technologist also demonstrated that how cordless ‘Pulse Oximeter’ attached to the body of the driver in the form of a wrist band measure ‘oxygen’ level of the driver and conveys text message if it found the value critical to the pre-loaded mobile number of the control through the micro device identifying the location of the train using GPS and mobile sim card installed in the system.

Avigyan said, “As the device is based on biological feedback and mobile network, the pre-programmed micro-controller with camera installed inside the driver’s cabin can simultaneously send real time pictures of the driver prompting the control to rescue him soon”. commencement of journey, so that alert message sent to the control can specifically identify which train driver suffered heart attack’, Avygyan said.

Avigyan who was earlier conferred best model award by Hooghly Engineering & Technology College had conceived the idea of ‘SAVE’ while trying to find a remedy for his father Anindya Kishor Das, an officer with Indian Audit & Accounts department, who has been suffering from “Obstructive Sleep Apnea”.

A doctor said, “Obstructive sleep apnea is a potentially serious sleep disorder. It causes breathing to repeatedly stop and start during sleep due to poor supply of oxygen. OSA patients can suffer heart attack during sleep. At the same time, if oxygen value in blood of a person drops below 80, he would suffer a cardiac arrest”.

Avigyan said, “I used to measure my father’s oxygen level in the Pulse Oximeter. He often has a poor reading that made me anxious. I was trying to find a solution to alert him when I thought if the train driver collapsed suddenly due to poor supply of oxygen how the train can avert accident. I began the study. My father also helped me and finally I created this device using simple technologies which we use in our daily life”.

Swati Sikdar, Assistant Professor, BME Department of JIS College of Engineering said, “The system is technically quite strong and feasible for implementation. His concept of using bio medical data for the alert is quite logical and quite commendable. The railways authority may examine Avigyan system as the existing alarm system of trains in India cannot stop train in case the driver fell unconscious”.

Avigyan’s father Anindya said, “We appraised the union ministry of science and technology about the system and for demonstration. The ministry, however,  informed me that it has sent it to Ministry of Railways for its study”