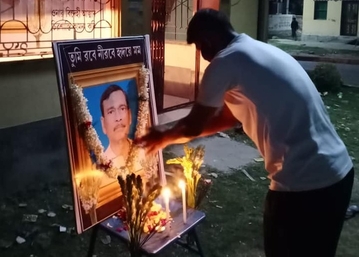 Kolkata/Krishnanagar, April 28: Senior Trinamul Congress MLA Gouri Sankar Dutta, 70, died in Covid attack at a private hospital in Kolkata on Wednesday night.  Dutta, who won from Nadia’s Tehatta as a Trinamul nominee, left the ruling party and joined BJP in last month apparently after he was denied a party ticket for the assembly poll.

Family sources said that Dutta fell sick due to Covid attack and admitted to the Nadia district hospital in Krishnanagar. However, he was taken to the private hospital in Kolkata since his condition turned critical. An  attending doctor at the hospital said, “His condition never improved despite our best effort due to certain comorbidity factors. He eventually died late in the evening today”.

Dutta was a long time associate of Trinamul supremo Mamata Banerjee, who made him Nadia district president of the party. However, he was removed from the organisational post last year for his alleged indulgence to internal feuds and factionalism.

In 2011, Dutta had first unsuccessfully fought the assembly poll for the first time from Tehatta assembly constituency. However, later in 2016 he was successful to win the seat.