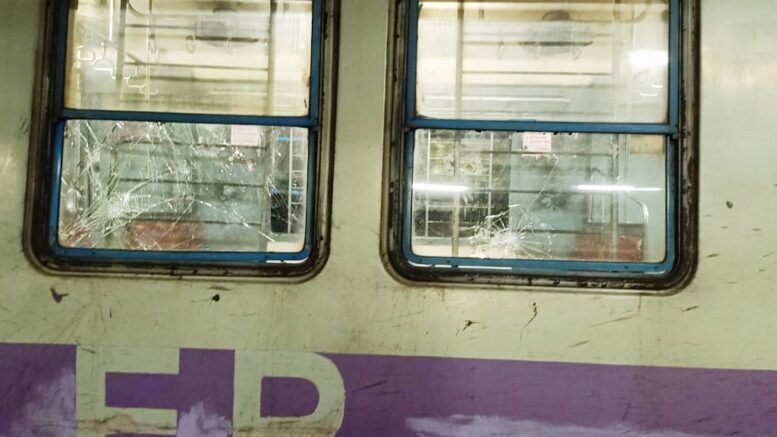 Bethuadahari, June 12: An unruly mob vandalized the Bethuadahari rail station and damaged a train while unleashing panic among the passengers on Sunday afternoon. The mob that was protesting the derogatory remark of former BJP spokesperson Nupur Sharma’s comment on Prophet Muhammad also ransacked several shops, and clinics in the town while taking out a protest walk in the town on Sunday afternoon and also assaulted policemen when they tried to remove a blockade they put on NH12 earlier in the evening.

The mob that was raising slogans condemning the controversial remark also allegedly hurled bombs on the railway track disrupting railway communication for about an hour. A large contingent of the police force from the Nakashipara police station rushed to the spot and controls the situation dispersing the rampaging mob. The incident prompted the district administration to clamp section 144 prohibiting any gathering of five or more persons in public places.

Similar action has also been taken in Nadia’s Karimpur where tension broke out following a protest rally in the town on Sunday afternoon. Police have refused to grant permission to take out any rally across the district as a law and order measure amid the tension.

Trouble began at about 6.10 pm when the mob entered the Bethuadahari rail station and began pelting stones putting blockades on the track disrupting the movement of Calcutta-bound Hazar Duari Express and a Lalgola-bound shuttle train.

A GRP official said, “The protesters were violent and attacked the train creating panic among the passengers. We tried to prevent them and urged them not to create tension. But, they were very violent and outnumbered us. They did not do any major harm on the Hazar Duari Express, but they damaged the Lalgola bound EMU rake very badly”.

Police sources said that a few hours earlier the protestors, who were about 2000 in number took out a protest march against former BJP spokesperson Nupur Sharma’s alleged remark on Prophet Muhammad. They later had gathered at a ground adjacent to the railway station to stage a demonstration. But further, they led a march and blocked the NH12 suspending traffic movement.

Additional SP (Rural) Nadia and other senior police officials persuaded them to withdraw the blockade and to help to maintain peace in the area. But the protestors suddenly turned violent and began to approach the Bethuadahari rail station, barely 1 km away.

But on way to the Bethuadahari rail station, the protestors went on pelting stones targeting the roadside houses and damaging several motorcycles, and totos that came in their way.

“They unleashed a reign of terror in the town for about two hours and concluded vandalizing the trains and other properties at the rail station. The Situation is still tense even though the Mob has dispersed”, a police officer said.

Earlier a Krishnanagar-bound bus of South Bengal Transport Corporation was also vandalized on NH12 near Chakdah town earlier on the day. The protestors unleashed panic and evacuated the passengers before vandalizing it.

To protest the rampage at the Bethuadahari station, local businessmen put a blockade at the rail station crossing in the town late on Sunday evening demanding arrests of the culprits.