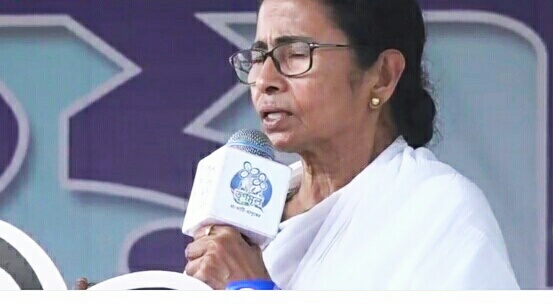 Krishnanagar, April 24: Trinamul Congress chief Mamata Banerjee on Wednesday accused Prime Minister Narendra Modi of donating money to influence voters. Her jibe at Modi apparently indicated that the BJP has been giving money to buy votes which it managed by converting black money into white through demonetization.

Accusing the BJP of purchasing votes, while speaking at an election meeting in support of party candidate Mahua Moitra in Krishnanagar, she said, “The BJP has been giving gifts and money from big boxes to influence voters. But, I am hopeful people will reject him the way he rejected their money during demonetization”.

Targeting Narendra Modi she said, “You may impose a demonetization on the people to accomplish your agenda of converting black money into white and to spend them during election so as to purchase votes. But, in reality you will not be able to purchase voters”.

She also alleged Modi has earlier distributed liquor license to some chosen persons ahead of Lok Sabha poll. “But, we will unearth when come to power”, she said.

Earlier speaking at the rally, Mamata Banerjee has also accused the BJP led government of keeping West Bengal behind all by exploiting the letterhead of its name as it comes close to last in order deliberately ignoring Trinamul led state government’s appeal to change state’s name to Bengal.

“Two years have passed since we submitted a proposal that is passed in our assembly to change the name of our state from West Bengal to Bangla. But, the centre did not bother it to convey its approval so far…it appears that they have allergy to the name of Bengal”, she alleged.