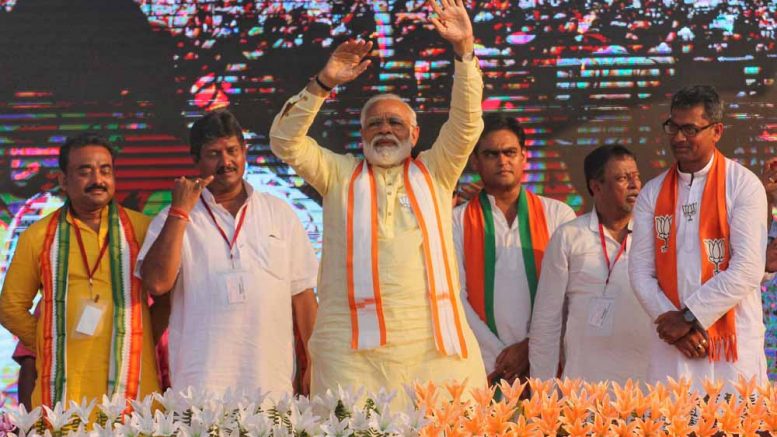 Narendra Modi in Taherpur on Wednewday. Picture by Abhi Ghosh

Taherpur, April 24: Prime Minister Narendra Modi on Wednesday called Trinamul Congress chief as “Sticker Didi” accusing her of labeling centre’s welfare schemes as own and promoting those in state for political mileage. He also accused Mamata of having a ‘sick mentality’ for denying people of Ayshman Bharat medical insurance scheme.

Speaking at an election rally in Nadia’s Taherpur, the prime minister said that the Bengal chief minister does not toil, rather only put her stamp to claim as own imagination. Taking a jibe at Mamata Banerjee, the prime minister who earlier tagged her as “speed breaker”, made the fresh allegation for blatantly hijacking the centre’s schemes stamping it as own without any ‘labour’.

However, Trinamul Congress leaders claimed that Modi can also be accused with same jibe as he also copied many of UPA government’s schemes and re-launched by his government during the last five years as NDA concept. In fact, Congress earlier in 2017accused Modi of repackaging its 23 schemes and introducing as own.

Nevertheless, the new tag by Modi to identify Mamata Banerjee added new political dimension in Bengal politics barely five days before the next phase of poll.

As an instance, he told people that the rural electrification scheme through which they got power supply at home is also a central scheme.

Saathiyon..Yeh bidyut bhi deti hain Delhi ki sarkar..and 7lakh people in Bengal enjoying electricity under this scheme. As you get the cheap ration through central government scheme, Didi has too put her stamp on it”, he added.

The other flagship scheme of Modi like “Beti Bachao…” is also a redone package of UPA government’s National Girl Child Day programme.

After witnessing last three phases of poll, didi is gradually losing hope. She has realized pulse of people of Bengal. She has now been engaging miscreants. Now people have come out against her.

Modi while accusing Mamata for rejecting Ayushman Bharat scheme  termed her having a ‘sick mentality’. “This is the biggest scheme in the world. People would get major benefit from this scheme, but she has no empathy for the poor and rejected it’. “Yeh bimar mansikta ki parichay hain”, he said.