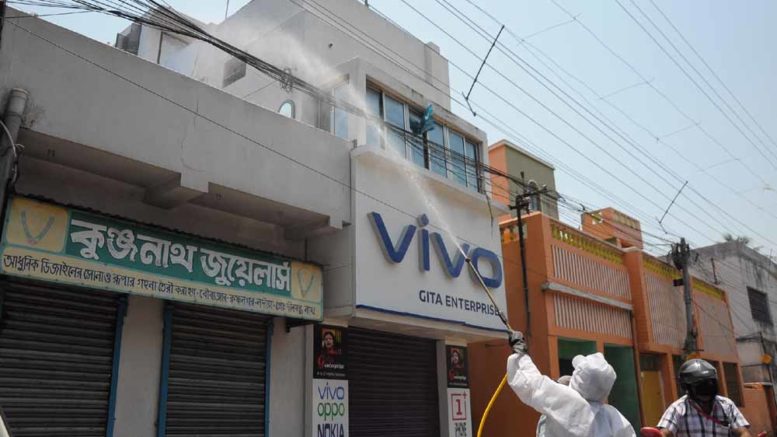 Health workers spraying sodium hypochlorite on buildings in the Bowbazar area of Krishnagar town on Friday. Picture by Pranab Debnath.

Krishnagar, May 15: An ‘unidentified’ Covid positive patient, who went missing on May 7 from Asansol, has left Nadia and West Burdwan administration in a tizzy. Even after five days, he was tested positive, the patient who stated to have hailed from Nadia remained elusive. Police have launched a hunt, but he could not be traced out till Friday night.

The Nadia administration on Wednesday night nabbed a person, a namesake from Krishnagar.  While he was sent to a Covid hospital in Kalyani, the mysterious patient remained elusive leaving the police and health officials in a flap.

On Friday night, a Covid test confirmed him ‘negative’, which practically ruled out that the Krishnagar based man is not the one for whom police have launched a hunt.

As a result, even after the expiry of eight days, neither the West Burdwan nor the Nadia administration has any clue about the elusive patient.

“This is quite alarming as we apprehend that this patient has already infected many others. He needs to be traced out before causing any further damage”, an officer of the Nadia administration said.

According to Insiders in Nadia administration, on May 7 a youth was intercepted by West Burdwan police close to the Bengal-Jharkhand border with suspected Covid symptoms. He was taken to hospital which collected his swab sample on the same day and put into an isolation centre in Asansol. But on May 9, a day before the test confirmed him Covid positive, the youth allegedly escaped.

The West Burdwan district administration lodged a missing diary at Asansol South police station. But, beginning a probe, police found that the address and phone number provided by the person are fake.

“The person enrolled himself as a resident of Chakdah in Nadia. We made contact with Chakdah police, but they informed us that the address is invalid and his phone number too was wrong”, an officer of Asansol West police said.

Questions have been raised about the callousness of the police personnel deputed at the Asansol based isolation centre from where the patient had escaped.

Since May 10, both Nadia and West Burdwan police have been running from pillar to post to trace out the man apparently based on the name and his apparently fake identity.

However, on Thursday Nadia administration scanning the voters’ list found a person in Tehatta’s Kusthia with a similar name as recorded by the elusive patient. A police team rushed to the Tehatta address but came to know that he is a medical representative of an ayurvedic company and resides in the Bowbazar area of Krishnagar town.

Tracking his phone, a team of Nakashipara police nabbed him near Bethuadahari on NH12 late in the evening. He was later interrogated by officials of the district administration.

An officer on Friday night said, “It is almost clear that the nabbed person is just the namesake of the elusive patient. At present we have no clue about the actual patient”.

SDO Krishnagar Sadar Manish Verma said, “We have prepared a containment plan for the Bouwbazar area. However, since the person has been found Covid negative, the containment plan has been dropped. The health authorities would take the decision about his discharge from the Covid hospital”.