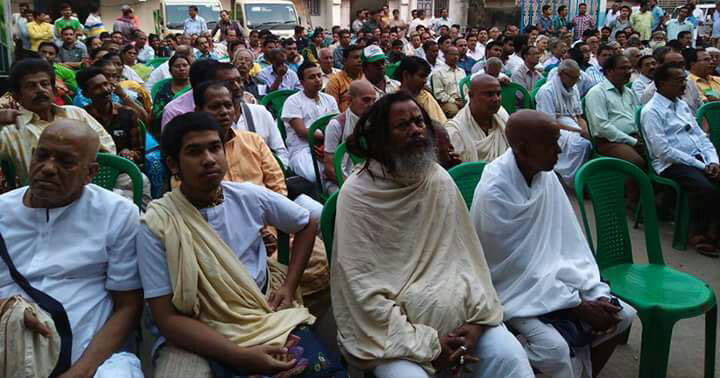 A section of the people invited to the meeting by Nabadweep Municipality. Picture by Samir Saha

Nabadweep, March. 1: An appeal to the residents of Nabadweep to go vegetarian during the three days holi festival made by the Trinamul ruled Municipality has evoked a mixed reaction in the town. While the many Vaishnab temple heads and organistions as well as a section of residents have welcomed the initiative, many on the other hand have raised question about the authority of the Municipality for making such appeal as they alleged that the appeal would eventually rob the fish and meat seller of their income.

On Tuesday the Nabadweep Municipality adopted a resolution after a mass meeting at its compound that it would appeal the people in the town to go vegetarian for three days from March 11 to 14 during the Holi festival and also discourage them to buy meats and fishes so that no blood shade and gory scene occur in the public.

The resolution was adopted with the consent of the people from different walks of life including a many heads of Vaishnab temples and organizes, who were present in the meeting.

However, the fish and meat traders attended the meeting said that they would keep their shop closed on the day of Holi – March 12 only as they would not be able to afford the loss for consecutive three days.

Nabadweep is considered as a holy town being the birthplace of Lord Sri Chaitanya. The town has about 200 vaishnava temples and maths.

The Municipality authorities have also asked its 24 councillors to visit each houses in their areas to convey the appeal of the Municipality and to request the people as well to try vegetarian foods for those three days.

Nabadweep Municiapality chairman Biman Krishna Saha said: “We have not issued any fatwah to the people, rather made an appeal before people on the basis of a mutual understanding to become vegetarian only for three days of the holi festival. Our town is traditionally associated with Vaishnab culture which advocates love for all creatures in this universe. The usual gory scene of blood shades at the meat and fish shops in the town make a visual impact among thousand of tourists, devotees as well as pilgrims who visit the town in large numbers during the holi and other festival. These people are not accustomed with slaughter of animals and blood shades. So we have decided to appeal the people in the town to try vegetarian foods only for three days for sake of tradition of the town”.

“Our councillors will visit each houses in 24 wards with our request and also invite clubs and social organizations and traders’ body to join the initiative if they think it is right for sake of the tradition of the town”, added the chairman.

Nabadweep’s Trinamul MLA and former Chairman of local civic body Pundarikakshya Saha said: “There was a long standing demand from many Vaishnab organization in the town to ban sale on open slaughter of animal during various Vaishnab festivals. This creates visual pollution and leaves first on the roads thorugh which ‘Nagar keertan’ passes. This time as a respect to their appeal, we have made an appeal to become vegetarian just for three day’s”.

“I don’t think that it would make any major problem to people rather be beneficial from health aspect. It is always good to be vegetarian”, added Saha.

Anil Das, a local said: “The appeal is logical as there are many festivals during which people do not eat meat and fish. It also happens during Nav Ratri in North India”.

Adwaitya Das, Head of Goriya Vaishnab Samaj, a community body president in Nabadwip said: “We are ver happy about the Municipality’s decision. We have been making this appeal since 1994 before the local and state administration. hope people would be kind enough to bear the trouble for few days”.

Suman Seikh, a meat seller who was present in the meeting said: “Respecting the appeal we will keep our shops close on the March 12, but on other two days shops will remain open. Otherwise it would be difficult to many of us to afford the loss”.

Fish seller Bablu Saha, who is also an executive committee member of local fish readers’ body said: “It is a good move, but as most if the fish seller depend on their earning from fish sell, we will keep our shops close only on the Dol purnima day. On other days we will sale fish if people come to buy fish”.

Local resident and CPM’s district committee member Sumit Biswas, however, accused the Municipality for interfering into people’s personal choice. “The Municipality is acting beyond it’s jurisdiction. It should leave people to go by their choice. The appeal rob small traders of their daily income”.