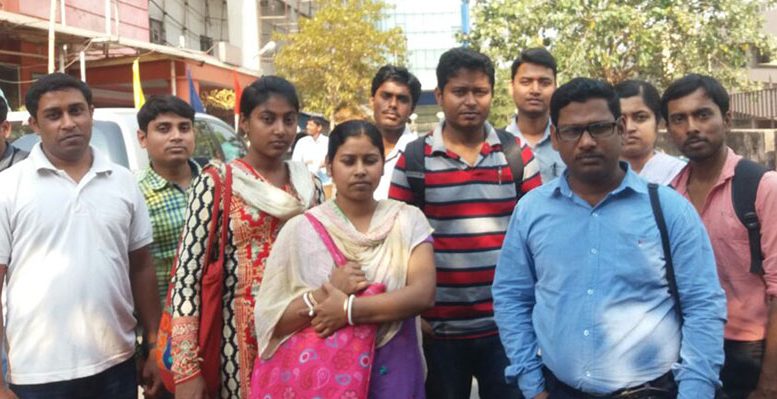 Some of the youths who were issued appointment letters, but withdrawn later by Council. Picture by Pranab Debnath

Krishnanagar, March 3: Debduhita Bandopadhya of Nabadweep was ecstatic when she received the appointment letter on February 12 as an assistant teacher of a primary school in Nakashipara issued by Nadia district primary school council.

Bogula’s Biswajit Banerjee distributed sweets among neighbors after he received appointment letter on February 12 as an assistant teacher of Patradaha Primary school. There are many like them in other districts too.

They all joined their respected place of posting on February 13, a day after their counseling when they were handed over their appointment letter.

But, unfortunately their joy did not last long as the Nadia district primary school council has withdrawn their appointment within 13 days because of a goof up it it committed.

The Nadia council has issued letters to these unfortunate “teachers” cancelling their appointment letters acknowledging that there were “mistakes” on their part and said they were “wrongly” empanelled in the “para-teacher” category.

The role of the Nadia council appeared to be contradictory as despite acknowledging the “mistake” they have blamed the candidates for non submission of engagement certificates by the school required for the “para teacher category”.

The unfortunate teachers have rubbished the council’s allegation claiming that they exclusively applied for recruitment in the ‘general’ teacher category as “fresh” candidate. In Nadia 15 such candidates have lodged a complaint with West Bengal Board of Primary Education as well as district magistrate Nadia requesting them to rescue them from “depression and humiliation”.

Biswajit Banerjee, a resident of Bogula college para said: “We are being punished for a mistake which we never committed. We never applied for para teacher category, but the council has been blaming us only to conceal their goof up. We are qualified candidates and our counseling was also held as fresh general category assistant teacher. The appointment letter was issued by the council carefully after the counseling. We have hidden nothing, but now the council has been trying to implicate us for non submission of experience certificate which was not at all required for our chosen category”.

In 2015 West Bengal Board of Primary Education organized West Bengal Primary Teachers’ Recruitment Examination. Candidates working as ‘Para-Teachers’, were also allowed to appear in special category. During September 2016 the viva voce tests were held for the successful candidates in the written examination. Counseling for the empanelled candidates began early this year.

Biswajit Banerjee said: “I applied as fresh candidates in general category teacher. On February 12 I appeared in the counseling when I was handed over the appointment letter. On next day I joined Patradaha primary school and taught their up to February 24. On February 25 I was shocked to receive a letter from the council which stated that my appointment has been withdrawn”.

Same is the experience of Totan Saha of Krishnanagar, Debduhita Chakraborty of Nabadweep, Saheli Biswas of Pairadanga, Alipriya Mondal of Badkulla, Rita Roy of Bogula, Amal Majumdar of Gangnapur, Sudipa Khan of Hanskhali and Smarajit Biswas of Ranaghat and many others.

Debduhita said: “The council has been deliberately victimizing us to hide own mistake. I applied as fresh candidate general category teacher. I never worked as para teacher. So there is no question of submitting the engagement letter by the school as Para teacher. There was a specific part in the application for the para teacher category, which I did not fill up at all”.

Nadia district primary school council chairman Ramaprasad Roy said: “Some candidates erroneously ticked the box as yes which sought to know if they were working as para teacher. Such candidates who worked as para teachers required to submit copy of the engagement letter as experience certificate, which these candidates did not submit. It is their mistake. By any way these deficiencies were overlooked by mistake by us during issuing appointment letter, which was observed later during verification. These candidates are not as such eligible for appointment in the para teacher category, so their appointment has been withdrawn and the letters issued to them were cancelled”.

Surprisingly enough in Nadia 148 vacancies were there for the para teacher category. Only 140 candidates were qualified in this category. However, most of them so far did not get any appointment.