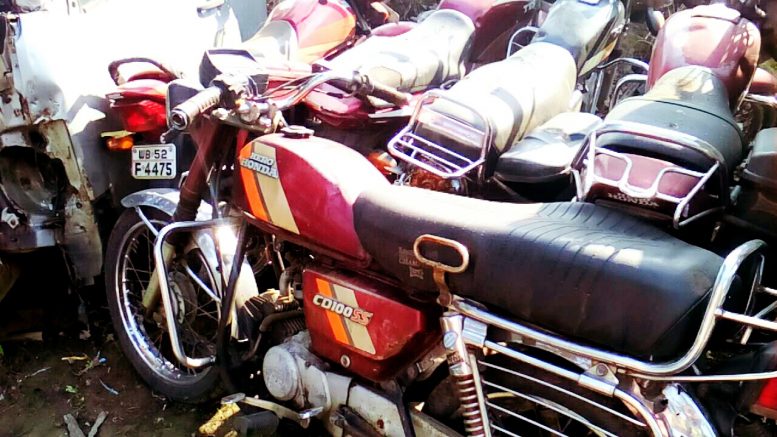 Tehatta, Dec.15: A Nadia judge today paid a surprise visit to the Tehatta police station after the officer in charge had mysteriously ignored to inform him whether police had seized a motorcycle of youth while arresting being accused in a case of assaulting police during April this year. As the officer in charge did not reply to the queries despite two reminders and also did not comply directions for physical appearance , ACJM Tehatta Bikash Lama today personally went to the police station and found out the motorcycle, purportedly seized by the police now dumped on the ground.

On April 12 this year police arrested Palash Saha from his residence in Bhawanipur for assaulting police personnel during a clash at a village fair. The police team also seized his Hero Honda CD deluxe motorcycle (WB-52F/4475). After his release on bail, Palash appealed police to return his motorcycle. But, he was denied.

“The police officials denied to have seized my bike even though I found the bike parked inside the police station premise. I on several occasions visited the police station and requested the OC to return the bike, but he refused. Finding no way I lodged a complaint before court in last month”, said Palash, a farmer by profession.

“Police seized the bike, but did not issue any seizure list to the owner. This appears to be a very dubious motive of the concerned police officer”, said Palash’s lawyer Amritabha Mandal.

The court taken cognizance of his complaint issued first notice to the Tehatta police on November 6 to inform whether any such bike was seized at all. But, Tehatta police did not submit any reply.

“Subsequent reminders were issued to OC Tehatta on November 10 followed by November 17 for submission of report. But, he did not submit any reply. Later on November 27, the ACJM issued an order directing the OC to appear physically before him for clarification, but he failed again. The ACJM set December 15 as deadline for personal appearance for the OC Tehatta. But he failed this too. This angered the ACJM who then decided personally to verify the allegation visiting the police station and found the bike dumped there inside the premise.” said lawyer Amritabha Mandal.

He later went back to court and ordered judicial proceedings against the OC of Tehatta.

Owner of the vehicle Palash, however, today told the judge that he would not take back the vehicle any more. “It has been damaged beyond repair and come of no use anymore”, Palash said.

OC Birendra Nath Pathak said: “It is a blunder definitely on my part. It was unintended as I somehow missed the notices. I would, however, not make any excuse rather feel apologetic. I have also begged pardon from the judge. I hope he would consider. I have also told him that the bike would be returned to the youth”.

Nadia Superintendent of police Sheesh Ram Jhajharia, however, refused to speak on the matter. “This is a subjudice matter and I will not make any comment”, he said.