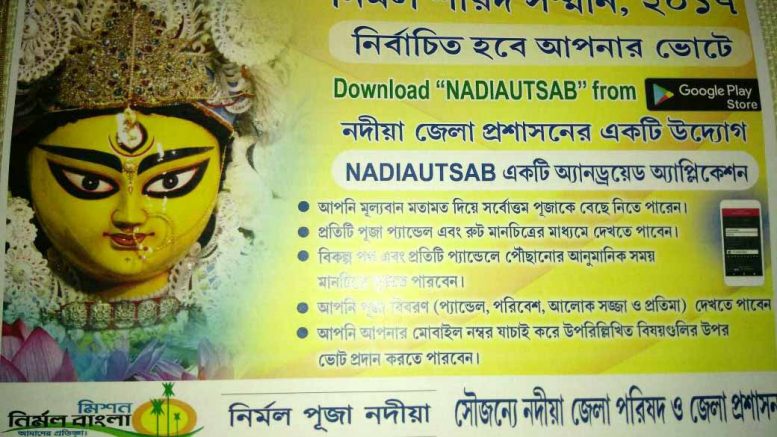 The detail features of the mobile application

Krishnanagar, Sept. 25: The Nadia administration has launched a mobile application today so that people could watch the Devi images and decorations of various puja committees in the district and also cast their votes in favour of the best one of their choice using their smart phones.

In an attempt to bring transparency in selecting the best puja through a democratic way and to make the festival visible across the globe, this android system based mobile application titled ‘Nadiautsab’ was launched by Nadia zilla sabhadhipati Bani Kumar Roy and district magistrate Sumit Gupta at the zilla parishad conference room. Till last year the district administration awarded the best pujas as chosen by a panel of juries appointed by it, but that never satisfied the puja organizers.

“Our objective is to make the pujas visible to people in large number and to introduce a democratic way to award the best ones”, said Nadia zilla sabhadhipati Bani Kumar Roy.

“We will confer award to three best pujas – first, second and third which will carry cash prizes of Rupees 15000, Rs 10000 and Rs 5000 respectively”, Roy further added.

To choose the best ones, the administration has already uploaded 1040 approved puja across the 17blocks in the district. The image details will be uploaded and updated from Panjabi, an official said.

The application launched under the initiative “Nirmal Puja Nadia” has been made available in Google Play store.

“This is a very small and simple application of about 4mb size, which has been developed by Onnet Solution InfoTech Private Limited. People needed to install it in their handset and register as pandal hopper providing their name and mobile number”, said Roy.

The application will also help the people in the district to identify the pandal of their choice, to view the still and video images of the pandal and its ambience, illumination in and around the pandal and the Devi pratima as well as can get the route chart including distance from their location, important facilities on the way too.

“This application will help people to view the 1040 puja approved by the administration”, said Nadia district magistrate Sumit Gupta.

“We have made the voting process very simple. Only the registered users will be able to use the app and to vote in favour of their favourite puja. For voting, people will be allowed to vote using their “one time password” (OTP) sent to their mobile number. But, one person can vote for one time and they will not be allowed to change their choice once voted”, added Nadia DM.