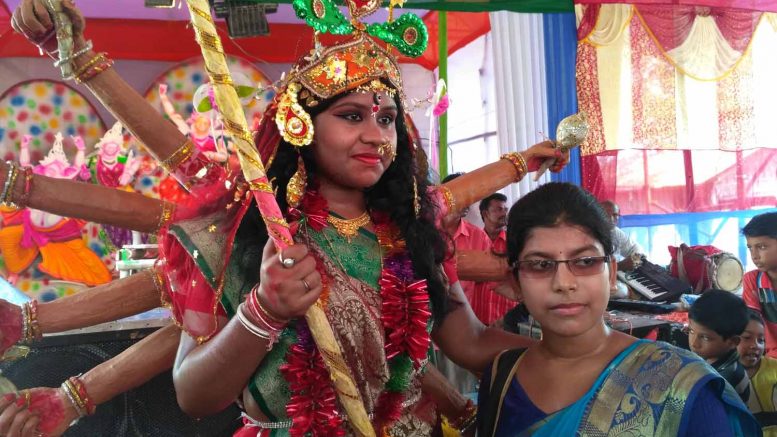 Sakdaha, Sept. 24: A Durga puja committee in Nadia’s Sakdaha today portrayed slain journalist turned activist Gauri Lankesh as Goddess Durga while enacting a folk drama titled ‘Mahishasuramardini’ that was staged as part of the inaugural ceremony of this year’s festival. Glorifying the sacrifice of the elderly journalist the organizers portrayed her fight against social evils similar to Goddess Durga. The members of the rural puja committee who live close to Indo-Bangladesh border tried to draw an ideological proximity between the two as in the mythology Goddess Durga is also as known Gauri.

Puja committee member and director of the play Kamal Sarkar, a farmer by profession said: “To us Gauri Lankesh is a symbolic of Goddess Durga. The way the divine beauty fought against Mahisashura – the evil force, in the same way journalist Gauri also fought against social evils like communalism, atrocities against women. She may not win in her fight, but people in India knew that her sacrifice would never go into vein. In our folk play we have adapted the role of Gauri Lsnkesh to the contemporary society of West Bengal”.

The members of the puja committee claimed that the murder of the journalist unleashed a shockwave, which inspired them to incorporate it to their folk play “Mahishasuramardini” by which they every year inaugurate the festival.

“We have some members who live in Karnataka due to professional obligation who also narrated us about the role of Gauri Lankesh and about her work. They also told how her murder made impact on the society. We also read a lot about her in the newspaper and thus we decided to change our script and to include Gauri Lankesh to it”, added director of the folk play Kamal Sarkar.

Payel Talukdar, a first year student of MA in political science at Krishnanagar Government College, who played the role of Gauri Lankesh, said: “I found a great similarity in between these two Gauris. Journalist Gauri is an example of her crusade against evils of the society. As Maa Durga fought against the evil force like Mahishasura, she also fought against evils like communalism and on other issues”.