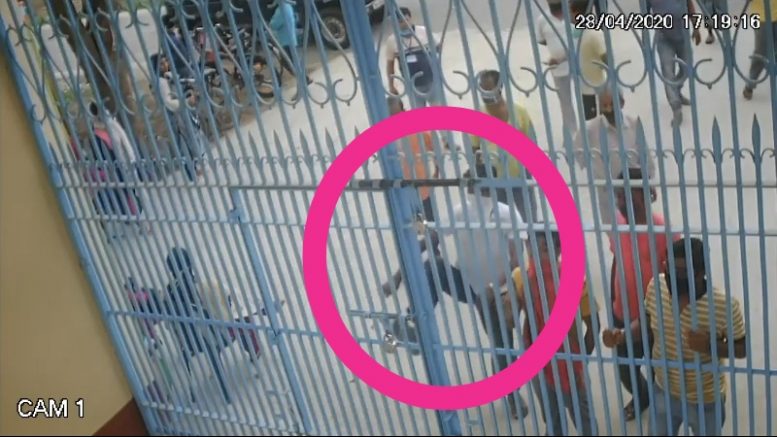 Nabadwip, April 29: An organization of Vaisnab monks in Nabadwip has lodged a complaint before chief minister Mamata Banerjee and Nadia district magistrate Vibhu Goel accusing a group of state government officials of occupying at least 20 rooms at its guest house allegedly by force with the support of some suspected Trinamul Congress activists.

The Mission authorities have alleged that a group of officials accompanied by some Trinamul activists forced them to open the premise at about 7.30 PM during evening prayer and demanded 20 rooms at its guest house ‘Vaishnav Awas’ to arrange for accommodation for doctors and nurses involved in Covid management. The mission authorities agreed to offer 10 rooms instead. But, the officials allegedly took occupation of the rooms by snatching keys. Later unidentified miscreants pelted stones and broke windowpanes of the guest house creating panic among about sixty elderly monks and devotees who stay in the Mission premise.

The incident angered the Vaishnav community in the town, which prompted Nadia District Magistrate Vibhu Goel to send Krishnagar Sadar sub-divisional officer Manish Verma to conduct to the Mission to conduct a probe into the allegations.

“There has been a communication gap with the Mission authorities, which has been sorted out”, Verma summarily said while refusing to divulge the details of the probe.

Some officials who were present at the spot on Tuesday night, however, accused the Mission authority of harassment. “It appeared that the mission authorities were trying to avoid allowing the doctors and nurses to stay at their premises being panicked of contracting coronavirus. The authorities were trying to buy time keeping us to wait for several hours”, the official added further. Sources said, on April 25 Nabadwip block development officer through a written communication requested the Gaudiya Mission authorities to arrange 25 rooms for the doctors and nurses involved in the Covid fight.

President of Gaudiya Mission B.S.Sannyasi Maharaj said, “The BDO requested us for room. But he did not mention when the rooms would be required. We initially offered them our school building. But, he apparently ignored and told nothing further.”

Trouble broke out when the doctors and nurses led by some officials of the BDO office arrived at the Mission gate on Tuesday afternoon and demanded 20 rooms.

B.S.Sannyasi Maharaj said, “We were not prepared for sudden demand. They came suddenly during the prayer and began ruckus going impatient. Some people accompany them started kicking our gate which created panic among devotees. We compelled to open the gate and offered them ten rooms. But, they turned violent forcefully occupied 20 rooms snatching the keys and breaking locks of at least two rooms”.

A senior officer of Nadia administration, said, that no specific indication of the date from which the rooms would be required became the bone of contention.

A section of the officials present during the incident on Tuesday evening, however, blamed the Mission authorities for deliberate non-cooperation.

“The BDO on a number of occasions verbally told the Gaudiya Mission authorities to keep the rooms ready for the doctors and nurses. In most cases, we have accommodated doctors and nurses in hotels, but in Nabadwip we have no option. Nevertheless, the Mission authority dillydallied apparently to avoid us. The team of officials along with the doctors reached the mission early in the afternoon, but they kept them waiting for about four hours when some local residents also turned angry for their behavior”, an official said.

“Nothing unlawful was done inside the Mission premises. A police team was also there, who witnessed also witnessed how the Mission officials non-cooperated with us”, the official added further.