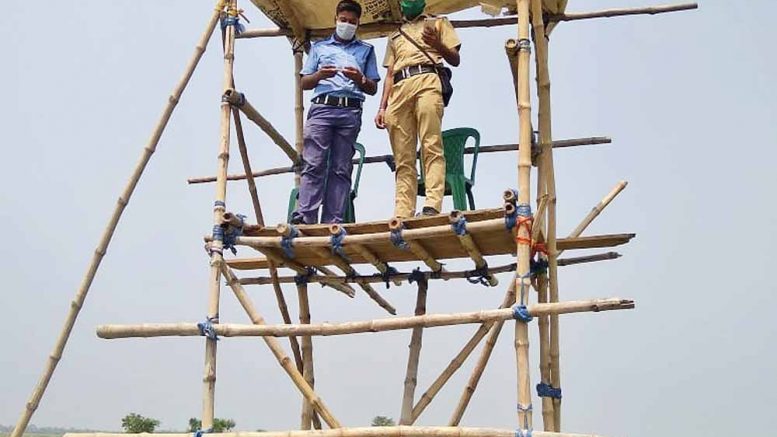 A policeman and a civic volunteer closely monitoring suspected movement of villagers on paddy field in Charatala village of Chapra.

Chapra, April 26: A ruthless containment by Nadia administration beyond the prescribed protocols being armed with watchtowers, satellite mapping, drone surveillance, CC camera monitoring, police action, repeated fever survey, supply of daily needs and cash through banks at the doorsteps has largely paid off to avert the possible outbreak of Covid in Charatala area of Chapra since a retired BSF constable was tested positive there on April 15.

For the last 11 days a team of about 100 officials of health, police, and general administration led by Krishnagar (Sadar) sub-divisional officer Manish Verma has been tirelessly working at the ground zero to ensure stringent containment with their own ‘Chapra model’. While the patient now undergoing treatment at a Covid hospital in Kalyani, six of his family members who were quarantined later tested negative. After the 11th day, with no spike of new cases has further been reported from the area, indicates well about the success of the endeavor. Nevertheless, the team will leave no stone unturned until the containment period is over.

The “Chapra Model” has drawn the attention of the Bengal Government. In last week Principal Secretary of urban development and housing, Subrata Gupta visited Chapra to check the model.

The brain behind the initiative SDO Manish Verma, said, “Our endeavor is a combination of deterrence with coordinated support of administrative leadership from ground zero against the disease and panic assuring all sorts of support to the people mobilizing local resources”.

To achieve the coveted containment target, the dedicated team of district administration took charge of the area on April 15 evening. As a first step, they sprayed 6000 litres of sodium hypochlorite to disinfect the area and barricaded the gateways to village imposing prohibition on movement from April 16.

SDO Manish Verma said “We appealed the villagers for cooperation while assuring them of supplying daily needs at their doorsteps. At the same time, we cautioned them for legal action for roaming outside without sufficient reasons”

Since a large section of the villagers is farmers, the administration had to allow them to go to their fields. However, their movement is being monitored from 6 am to 8 pm by the police and civic volunteers through the five watchtowers erected around the village.

“People are allowed for farming from dawn to dusk under the watchful eyes of our team. Any misuse of this exemption will be dealt strongly”, the SDO said.

In a similar way, aerial surveillance by drones, CC cameras installed at all the barricades monitoring the movement of the people. Any suspected movement being conveyed to the dedicated police team for taking necessary action.

“The CC cameras, drones, watchtowers are the deterrent measures to ensure people stay home. But our aim is not to

create any fear, rather make aware of the risk factors while assuring them to satisfy their daily needs. At the same time we are monitoring their health through repeated fever test…at least thrice during the containment period”, said Verma. To ensure no lapse on the part of the health teams, videographers have been tagged with them.

To ensure, the administration has engaged the 23 local grocers in Charatala and 4 vegetable vendors from Chapra to supply at doorsteps creating separate service areas for them. “We have provided them vehicle support for supply”, an officer said.

As per the instruction of the administration, two banks have also come up to deliver cash opening through service points at doorsteps.

Two agents of the CSP of the banks have been providing dawn to dusk service delivering money at the doorsteps of the inclined customers, an officer added.