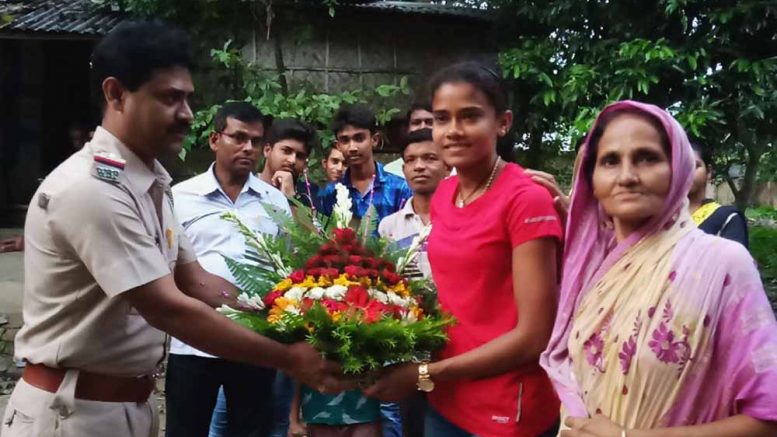 Debashree being handed over with a bouquet by a police officer

July 26, Nakashipara: Nakashipara police today felicitated Indian sprint star Debashree Majumder at her home. She was handed over a bouquet of flowers by officer in charge of Nakashipara police station Mukul Miyan. A resident of Toibichara village near Bethuadahari, Debashree is a specialist sprinter in 4×400 meter relay race, who won the gold at the 2017 Asian Athletics Championships that was recently concluded in Bhubaneswar. The women’s team consisting of Nirmala Sheoran, M.Povamma, Jisna Mathew and Debashree Majumder proved to be the fastest completing the entire rounds in only 3.31.34 minutes. Earlier in 2014 Asian Games Debashree represented India and d won gold medal in similar way in 4×400 meter relay race. She also won the silver medal in 2015 Asian Track and Field Meet, but was unsuccessful in the Rio Olympics.