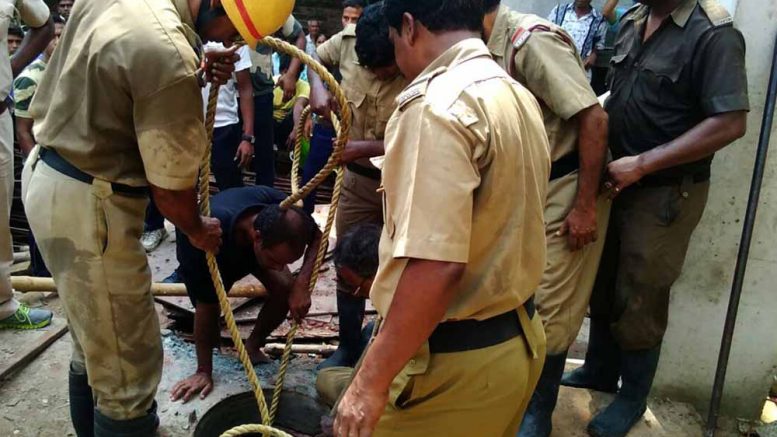 Fire brigade personnel recovering the bodies of the deceased labourers from the tank in Nabadweep. NfN Picture

Nabadweep, July 28: Three construction workers died apparently in suffocation in Nabadweep town today morning when they entered into a newly built septic tank through a manhole to remove the shuttering from inside over which the top cover of the tank was cement casted.

Police with the help of fire brigade personnel recovered the bodies after a rigorous effort for over one hour. The bodies were sent for post mortem to ascertain the exact reason for death. Police have meanwhile initiated a case of unnatural death.

The bizarre incident occurred at the construction site of a proposed nursing home being built on Woodburn Road in the town.

Two of the victims were identified as Krishna Halder (32) and Santu Debnath (23), while another remained unidentified till report last came in. Deceased Krishna and Santu were residents of Prachin Mayapur and Nabadweep station road.

A Police officer said: “We would first ascertain the exact reason behind the death and initiate action if any negligence is found on the part of person engaged the laborers”.

Owner of the building Vivekananda Saha, a resident of Lake Town in Kolkata was not available.

Local sources said that the masons casted the top cover of the tank two weeks ago. Today they came to remove the shuttering from inside. Two laborers went inside through narrow space of the covered top and died apparently due to suffocation.

An officer of Fire Service department said: “It appears that the three laborers died either of suffocation due to formation poisonous gas or due to lack of oxygen inside the tank”.

Local sources said that today morning it was Krishna Halder first climbed down inside the tank. Observing that he was not responding since long, Santu climbed down for help. A local villager said: “Soon after climbing down inside Santu started screaming for help, but became silent within few minutes. Apprehending him in trouble the third labor went inside and died within minutes