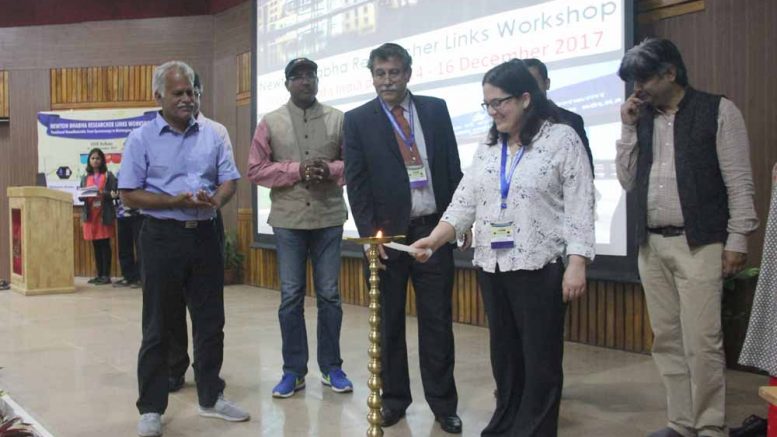 Mohanpur, Dec.14:  In an endeavor to develop an international partnership bringing together young researchers from the UK and India for industry friendly research output, a researchers link workshop under the aegis of Newton–Bhaba Fund began today at the Indian Institute of Science Education and Research-Kolkata’s (IISER-K) campus in Nadia’s Mohanpur.

The prime objective of the 3-day’s workshop, as explained by is to involve the scientists into social and economic development. as the scientific research should no longer be confined within the enclosures of laboratories, rather be industry oriented, as stated by IISER-K director professor Sourav Pal, who inaugurated the workshop.

“A huge amount of money being spent in research works across the world. Many brains are being used at laboratories. But, it is high time that the research findings be translated for benefit of people through the industry. It should be used for capacity building of the researchers as well. A researchers should not remain be satisfied only by publishing his findings in a journal rather come up for social and economic development. They should work in collaboration developing link among each other across the globe for better results and fruitful inventions”, Professor Pal said.

This workshop “Functional NanoMaterials: From Spectroscopy to Bioimaging”, a first of its kind in eastern India, is supported by a Researcher Links grant under the Newton Bhabha Fund.

Joint coordinator professor Prasun Mandal of IISER-K said: “The prime objective of the workshop is to bring together the chemists and researchers from other faculties so that they could build a partnership to explore new ideas for social and economic development. In the next 3 days the young scientists from across the globe would solve problems and give births to new ways for development with global partnership and collaboration”.

“The Newtwon-Bhabha Fund which help young scientist to help explore partnership building organized the workshop in association with the University of Manchester, IISER-K, British Council and the Royal Society of Chemistry-UK”, professor Mandal added.

“It has a total UK Government investment across all countries of £735 million up until 2021, with matched resources from the partner countries”, said joint coordinator professor Louise Natarajan, of University of Manchester.

Stuart Govan, Program Manager, International Engagement at Royal Society of Chemistry said: “The Royal Society of Chemistry is delighted to be match-funding this Researcher Links workshop under the Newton Fund. Working with partners around the world to ensure a flourishing future for global chemistry is our prime objective. It is exciting that this workshop has brought chemists together scientists from other disciplines to solve practical problems of importance to India”.